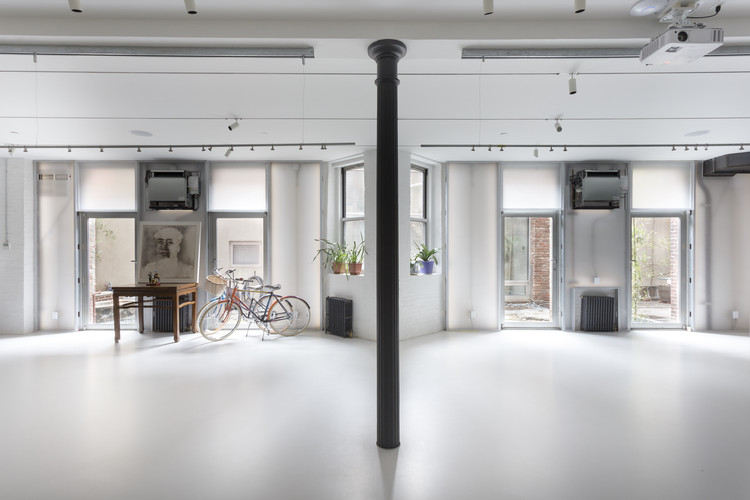 Text description provided by the architects. The renovation and expansion of Cai Guo-Qiang’s studio in New York, led by OMAPartner Shohei Shigematsu, organizes the studio’s multiple functions around a central, light-filled courtyard. The studio, located in an 1885 schoolhouse in New York’s Lower East Side, previously consisted of one floor on the ground level. The expanded space now includes both the basement level and an adjacent storefront on First Street. Now twice the original square footage, the expanded headquarters enhances the artist’s capability for production, exhibition and reception.

“A series of distinct vertical connections from the street level illuminate the cellar level below,” commented lead designer, Shohei Shigematsu. “Natural light from the courtyard filters down through a series of light wells composed of walkable glass panels and a reflective bamboo vault. Inside, a central stairwell provides circulation to the lower level, as well as a double-height display space. An existing structural vault was repurposed as a periscope, offering views to the street via a mirrored desk in the library.”

Without gallery representation, the 8,675 square foot studio plays a crucial role in the artist’s operations, acting as the main work, archive, gallery, reception, administration, and office space. The porous boundaries between the programs unite the studio through continuous materials and light. The resin wall spans both levels along the courtyard edge, acting as a central spine distributing natural light. The wall system is constructed with integrated lighting and mechanical infrastructure, incorporating storage, display, workspace, and support spaces at various points along its length. The renovation also preserves many historic elements of the building, including the red school door which continues to serve as the main entry, original brick and stone masonry and archways, and the existing stairs and iron railings.

Each room has the flexibility to function as both a private workspace and public venue. Two ateliers with museum quality lighting are used for daily exhibitions as well as catered receptions. In the cellar, a new space with A/V capabilities and a sixteen-foot solid Douglas Fir table hosts large meetings and film screenings. The library provides a dedicated space for interviews with publishers and journalists with Cai’s collection of publications close at hand. A tea room composed of the essential elements of a customary Japanese tea house—tatami mats and a floating bamboo reed light fixture—acts as a traditional ceremonial space for visitors as well as a modern contemplation space for the studio. 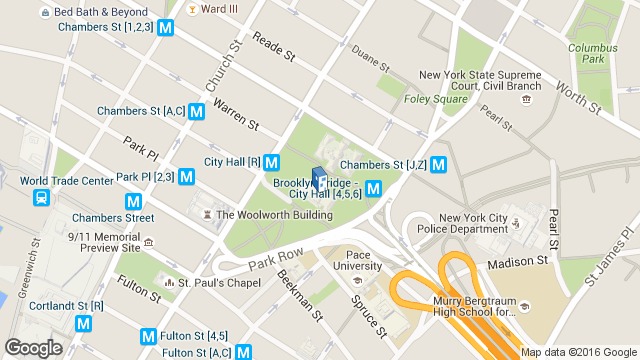 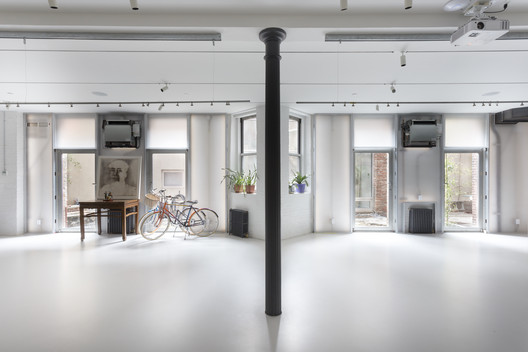