Text description provided by the architects. The design of our project was developed to focus on three strong intentions structured by the heirloom of this singular parcel.

Above all is the question of the garden, this protected and timeless area that we perceive, and that we will be able to make visible. This is not only to respect an urban rule by returning the same volume of soil-grown, but also to preserve the maximum of an atypical plant heritage, to free the ground as much as possible to maximize the garden, and finally to structure it in order to generate depths of field and gradations in the perception.

Surrounding this garden is a heritage, a juxtaposition of disparate buildings with the chapel at the center. Here again the question is rather landscaping than architectural.

The constructed elements are entangled; therefore generate a composition we may not dismantle. Then we retain as much as possible of its original implant to respect the ground floor with all the constructions juxtaposed in a U shape. Thus this whole built periods and architectural styles are preserved as witnesses of a complex past in which and from which we want to overlay a contemporary work.

This out of time organization generated a balance for the neighborhood, kind of a landscape stability with a structuralizing void, a punctuation in the street, a moment of silence. Aware of the mutation that will have the realization of a new project on the environment, we wondered on how we could give new qualities to the neighbors.

There is first the collapse of the wall which is replaced by a limit made of structural glass, totally transparent and opening completely the garden on the entire line on Rue de Saxe.

The new building is compact, built on stilts, and framing the view on a second field. A majority of the trees is conserved; the courtyards are now open on an unobstructed view and the gables and blind walls are covered by climbing plants. 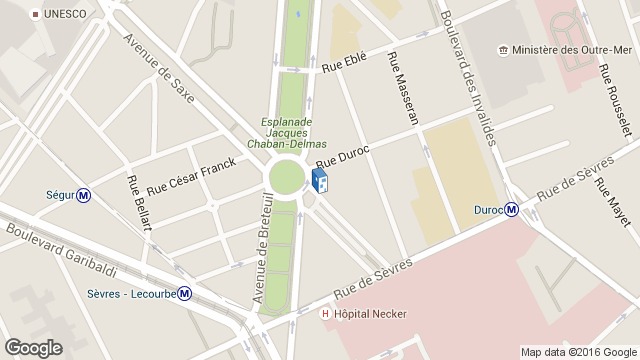