Save
Harvard Researchers Develop 4D-Printed Structures that React to Water

In 2013, Skylar Tibbits of the MIT Self-Assembly Lab introduced a new phrase to the architectural lexicon: 4D Printing. The concept, which built on the hype surrounding 3D printing and added the dimension of time, describes materials that can be constructed through 3D printing in such a way that they later react and change shape in response to an external stimulus such as heat or moisture.

Tibbits demonstrated his idea with a composite of two materials, but now researchers led by materials scientist Jennifer Lewis at Harvard have gone one better, creating a method that produces the same effects with just one material.

Developed in tandem by Harvard's Wyss Institute for Biologically Inspired Engineering and John A. Paulson School of Engineering and Applied Sciences (SEAS), the new process uses hydrogel containing microscale "cellulose fibrils" which expand when exposed to moisture. By carefully aligning these fibers during the initial printing process, the final object can be designed to change shape in a certain way when wet.

The researchers also created a mathematical model which they can use to plan the transformation that the printed object will undergo. The prototype reacts to water, however Lewis states that, with a different formula used for the printing fluid, the same technique could conceivably be used to create objects which change shape in response to heat or light. The material could even be altered to carry electric current, potentially opening it up for a wide variety of delicate engineering applications. 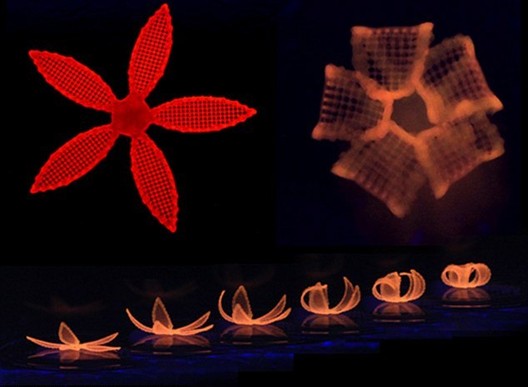