Save
The Corner House in Kitashirakawa / UME architects 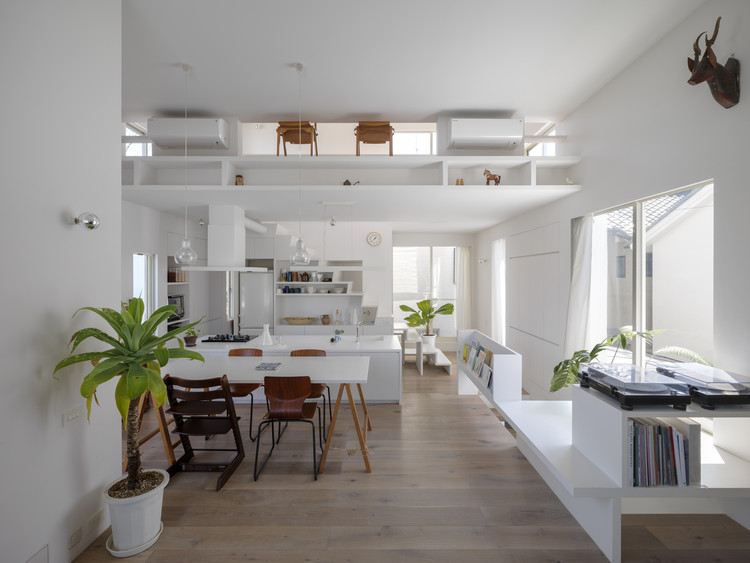 Text description provided by the architects. The site is located in Kitashirakawa, Kyoto adjacent to a stream, the Higashiyama mountains with its ‘Daimonji’ of ‘Gozan-no-Okuribi’ (a summer event in Kyoto) and has distant views to Hieizan mountains. The site overlooks open-spaces both across the street where the local university has a botanical garden, and adjoining where a children's playground is situated. Together the two open spaces turn the site into a corner block.

How can architecture respond to such a site?; As a response, I saw the roof as is an important contextual element within the area and develop it as a concept. In this quiet residential area, there are narrow streets with a mix of old and new houses, in which their appearance and roof forms are diverse. As an approach to the context, I selected an appropriate roof for both the program and the site and made a study. As a result, I decided to choose simple sloped roof with a ridge in a diagonal line. The roof form was eventually deliberated and discussed in a design review panel as the shape was unprecedented within the strict design guidelines of Kyoto. The roof form was eventually approved as it demonstrated that despite the house’s scale, it considered the urban context and conformed to the stultifying regulations of Kyoto.

The house is for a family of 4 people. The main spaces are open to form a single space and act as the hub of second floor where the family spends most of their time. The space is connected to the third floor and a loft by a void, which is covered by a large ceiling projecting from a terrace. It is possible to live in this central space while feeling all the signs of family life with the blind spots made by floor slabs with different levels, kitchen and stairs. This simple framework, which allows the space to stand out, details were planned minutely providing the house with consistency and coherence to the design.

A "band" attached to four sides on the second floor is used as a cabinet and a bay window that creates a space for planting, the display of objects, as well as a bench and a peak. This band reinterprets the traditional ‘En’(veranda-like), ‘Shoin’(study-like) and ‘Toko’(alcove-like) ‘Degoushi’(grilled oriel-like) and transforms an abundant residential configuration into expansiveness space, that acts both physically and psychologically. The “bands” depth thickens the boundary of the wall making the division between in-and-out ambiguous.

The eyes scan rove across planting on a terrace and a peak, cherry blossoms in children's playground, university botanical garden and far mountains, and not just the borrowed scenery from an opened window. In this house the family is living while feeling body movement, a diffuse vision and the experimental links every day act on the unconsciousness.
Satoru Umehara / UME architects 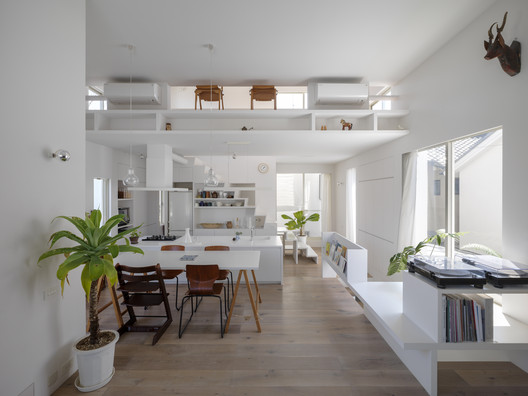