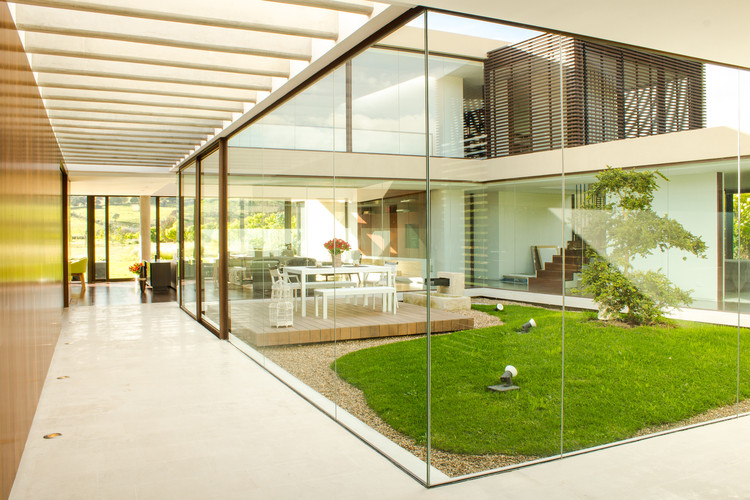 Text description provided by the architects. Standing at 2750 metres above sea level, in the outskirts of La Calera, Cundinamarca, Casa 5 enjoys the unbeatable long views of the surrounding mountains and valley, and the presence of the greenery and the lake that touch its garden.

The weather here is somewhat cold all year round, so the house was designed to respond to its environment by harnessing the solar radiation during the day through its large windows, warming up the different areas, while at the same time isolating itself from the floor and exterior through double walls that allow to keep the heat inside during the night.

The house appears closed towards the street access, placing car park and service areas here in order to ensure privacy. Once the main entrance door is crossed, the visitor meets a wide and transparent central patio that organizes internal circulation, fills up the spaces with natural sunlight and becomes the heart of the activity within the house. Its wide and frameless windows allow the presence of the greenery to be felt everywhere.

The more public areas are placed in the south wing of the house, closer to the entrance. They end up in the dining room and double height living room, which enjoy the closer views to the lake and garden. The bedrooms and more private areas are placed in the north wing, the master bedroom facing towards the water. On the second floor there are the two working areas for the owners, one on each wing, which enjoy the long views independently.

The presence of the patio and the large windows, along with lightwells in the service and more private areas, allows the sun, the light and the greenery to be felt throughout the house. The continuous transparencies through the patio, the garden and the lake generate a peaceful and natural environment. 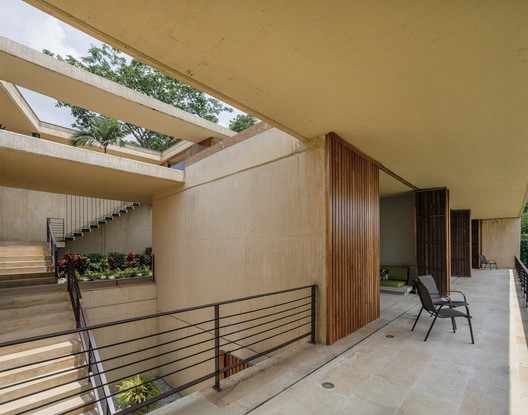