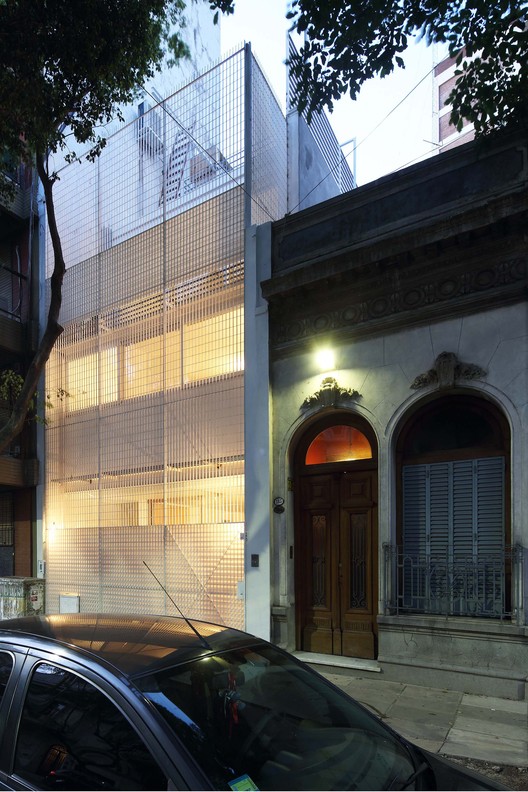 Text description provided by the architects. The house is located one block from Centennial Park, a large green public space, located in the Center of the city of Buenos Aires, where neighborhoods like Caballito, Almagro and villa Crespo converge.

A large network of urban infrastructure such as underground subway A and B, electrical substations and cloacal ventilation stacks of the primary network, strengthen the tissue where the public space works as a support of social containment.

The block in which the project is inserted presents an unusual geometrical form that makes the house take part of this unique heterogenic structure. This unique mass is composed of houses up to 2 and 3 levels, two mid-rise towers and a church.

The street is presented with an abundance of trees. When approaching the house from a pedestrian point of view the facade is synthesized in a permeable abstract plane.

Since the emplacement of the project has so limited measurements (4.80m x 14.70m) the project proposes a vertical solution, where all the rooms have the advantage of having a generous measure.

On the ground floor the general measures of the terrain can be recognized and suggests a continuity with the sidewalk but defined by the metal frame and a translucent band of the entrance. The ground floor functions as access point and upholds a flexibility for multiple uses. This place is capable of generating air currents through the linear stair system which connects all levels.

On the first level with bedrooms and bathrooms upstairs are illuminate and ventilate with abundant air and light.

In the "piano nobile" are the kitchen and the living room with an expansion. The resolution in the section of the house, promotes the connection with the terrace and allows a better view toward the street and a direct relationship with the top of the trees. From the terrace or living one can perceive the immense sky of the city and reach long views towards the apse of the Church and Park.