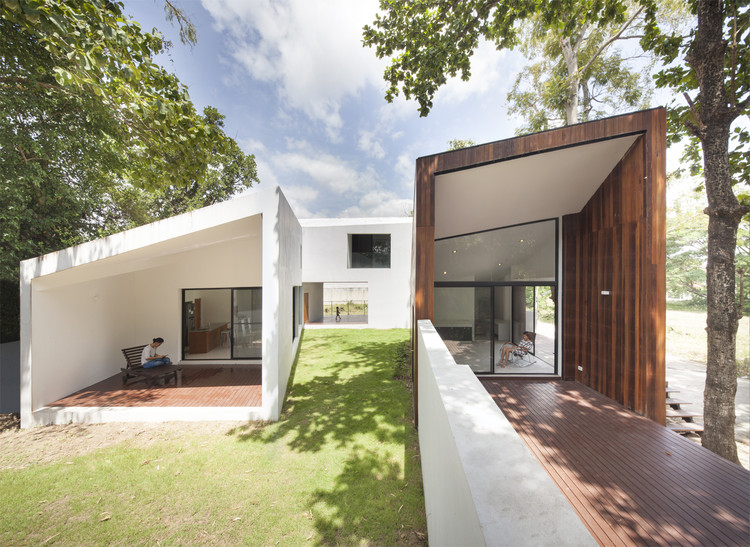 ‘Baan Rim Kao’ is a family home where the owner wished to open a coffee shop and a music school within the same property. The site is located next to a fifteen meters wide Mae-Kao canal, (the sub-canal from Mae-Ping river of Chiang Mai, Thailand) with more than ten large trees on the site. Inspired by the surrounding trees and water, the architect believed that there should be a unique way to reach the house. As such a typical front door to the living areas was replaced by a garden-room that leads its inhabitants to various spaces in the house.

The architect arranged the house into two volumes to avoid the existing large trees. By considering the garden and existing trees as the main focus, the central garden room becomes the crossing garden. The long, narrow entry path instantly opens up and leads one to the canal at the rear of the property from the moment they step into the house. This play creates a direct impact on the visual connection from one end of the property through to the canal.

By converting a garden into the main crossing garden/courtyard that replaces the conventional way of entering a house, this place becomes the starting point before diverting to other rooms. The coffee shop is placed at the front of the property to be easily accessible to visitors. This large volume is also designed as a large screen that separates the owners’ privacy from the main street.

From inspiration of the traditional community along canals in Thailand to various angular spaces created by revealing and slicing views towards the canal as the key strategy.

Inspired by the traditional communities situated along canals in Thailand, the layers of various roof slopes are formed according to the function of each household. As a result, the land width next to the water is normally the shortest dimension which becomes a challenge to maximise this view. The architect resolves this problem by diverting each volume from its main axis and arranging every room so as to gain a visual connection to the water.

The coffee shop is a single level low rise to allow a higher elevation at the canal end that maximises views. The area away from the water is generally kept low to allow visual privacy to the living quarter which is arranged as an L-shape floor plan. The higher side of the L is located the furtherest from the water and gains views above the lower volume.

Each building volume uses a slicing technique to eliminate walls that block views, allowing every room to see the water. As a result, a trapezoid with a unique length to each side creates interesting attic spaces. This also forms captivating shadows leading to the tranquil spaces of the central courtyard and canal.

Note: This project was originally published on September 17, 2016