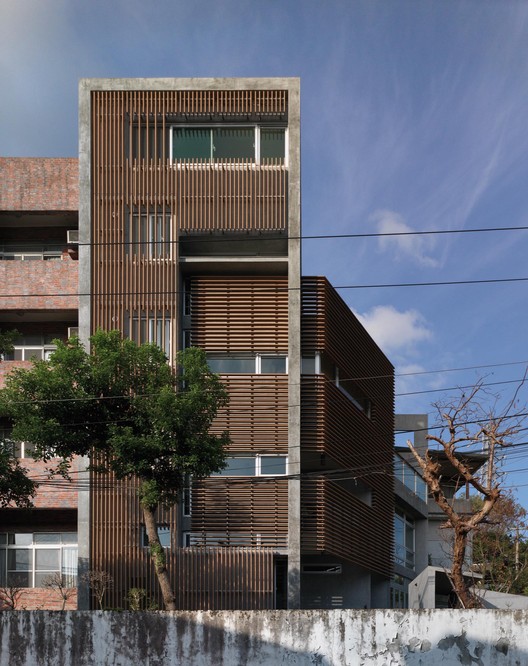 This single family house is located in a gated community on a hill near Taipei. Ever since the beginning of the design, a portion of the land property right was not clearly defined (the issue had been resolved later) hence the structure is limited to be in the North-West of the site. The result is that only 98 sqm of the land is permitted to be developed on this 280 sqm site and the building has to grow vertically with each interior floor area varies from 46 sqm to 76 sqm only (including stair case & elevator shaft).

One main challenge is to satisfy the needs of a multi-generational life style (grandparents, parents, and kids living together) consists of 6 family members in such a limited space. Another main challenge is to respond the local climate which is characterized by intensive heat & sunlight, frequent rain, and high humidity.

The House is at a corner between a 6M wide community major rout and a 4M wide lane. The neighboring houses are all facing the 4M lane on the South-West side. The design follows this pattern making its South-West facade to be perceived as a building front from exterior. This is the first “front” of the house. Only few limited openings are created on this first front due to privacy requirements and western exposure to direct sunlight. All the major openings are facing South-East allowing natural light from this direction. Therefore, from the interior, the “front” of the house would be perceived as the one facing the garden instead of the one facing the lane – the “front” turns 90 degrees from outside to inside. The garden keeps the major route in a distance to provide adequate privacy. This is the second “front” of the house.

Right by the site, the major community route makes a big turn and directs all uphill views toward this house. To address this significant direction, a volume is created on the East wing and angled towards this specific direction. When approaching the house uphill, this angled facade becomes the “front” of the house. This third front also connects the other two and completes the totality and identity of the house.

The area has the distinct characters of suburb Taipei: high density development within natural surroundings. They are small urban blocks between mountains. Most land lots are very small with very limited open space. We concentrate the volumes on one side of the site leaving nearly half of the site being a garden – a sufficient open space to itself. Shortly after the project completion, birds, bees, frogs... quickly settled in the garden. The solid and the void play equally important roles in the project; they counter weight each other and being a backdrop for each other. Multiple levels of outdoor space were created allowing open space extends from ground level up.

Located in sub-tropical zone, Taiwan has long and intensive summer hence reducing heat absorption is an issue needed to be addressed carefully. The building is a RC structure which stores large amount of thermal energy and affect physical environment. Rather than relying on mechanical equipments, this project responds the heat attack through design strategies. The volumetric arrangement plays a role as the first defense at a larger scale. The West rectangular volume is substantially larger and taller than the East triangular volume, and the East volume has more setback distance than the West volume has.