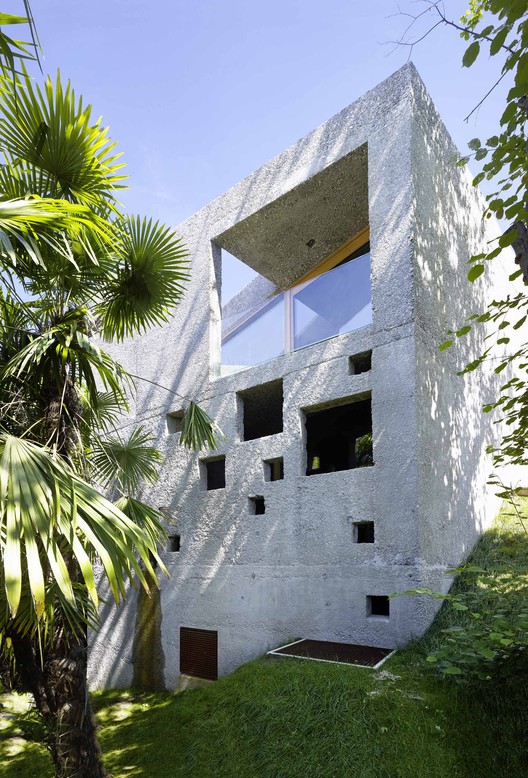 Text description provided by the architects. The house, designed as a residence for a family of three persons, was built in the immediate proximity of the architecture office in Caviano on the Lake Maggiore.

In terms of adequate architectural densification new living space should be created on a remaining area of just 128 m2, on the same plot as the architecture office was built in 1981, without damaging the existing qualities. On the contrary, an enrichment of the outer spatial situation should be generated with reasonable densification in context with the existing building.

The polygonal exterior shape and the steep topography of the site let the building appear as an archaic stone block in middle of the forest, this is reinforced by the rough washed concrete surfaces becoming darker by the weathering.

To the mountain-sided street the construction presents itself as a closed, simple one-storey volume. The only opening towards the street is the raw steel gate leading to the entrance court. A 3 m wide forecourt with a natural stone pavement and two palms connects the house to the street and upgrade it spatially.

Both courtyards, each with a wisteria, let the living room becomes a “garden” room and let the inhabitants experience in an unusual intense way the varying atmospheres of the weather and the light.

A skylight above the staircase allows light to penetrate into the lower floor, which accommodates two bedrooms, each with its own outdoor loggia, the bathroom and the stairs to the cellar, where is the technique and a workspace.