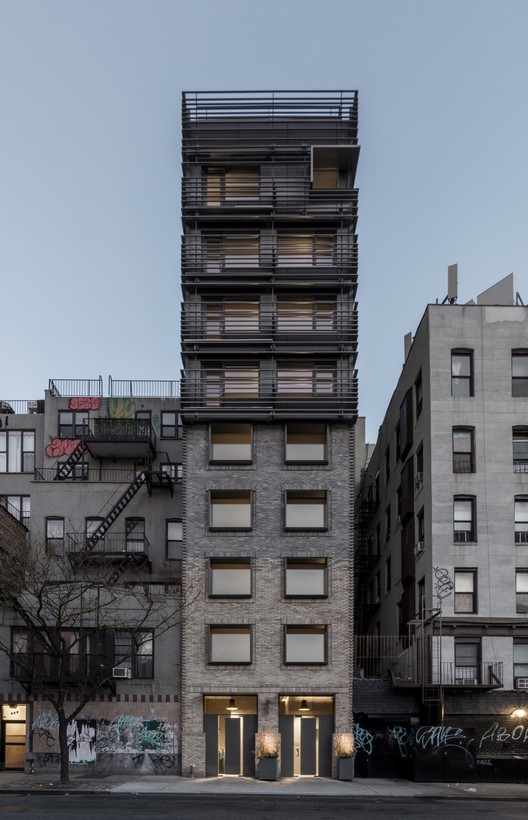 Text description provided by the architects. 120 Allen Street located on the Lower East Side of Manhattan and is comprised of sixteen furnished studios and four furnished apartments with a commercial space at grade. Grzywinski + Pons designed the building, the interiors, and much of the furniture. Located on an infill lot in a classically gritty LES tenement block, the property — while very narrow — is block-through and as such has frontage on both Allen and Orchard Streets. In order to accommodate the allowable floor area on such a narrow footprint, we bifurcated the mass on the north-south axis creating a slender ten-storey tower on the Allen Street side (a far wider thoroughfare with arresting skyline views) and a five-story volume on narrow Orchard Street which are contiguous in plan. While the west facing tower isn’t strictly non-contextual (there are a few other far bulkier “finger buildings” on the block) we did see the upper portion of our tower as heterogeneous and decided to design the building accordingly. By treating the top five floors conceptually as a vertical augmentation to the neighborhood’s historical typology we elected to create a different skin for it.

While we didn’t want to pretend the “base building” wasn’t brand new, we wanted the first five floors to pay homage to the existing masonry and stucco tenement neighbors. We clad the first five floors in handmade coal-fired brick and designed our own take on rusticated masonry details. Deeply framed glazing adds to the facade’s texture while mitigating solar heat gain and the skin reacts to the sun’s path throughout the day in a softly graphic way. We chose bricks that subtly change hue as the building rises until they closely match the cladding of the volume above. The upper part of the tower — the volume beyond the rooftops of the adjacent buildings — is clad in zinc panels which are then surrounded by a veil of louvers. While their primary purpose is — like the window boxes below — to mitigate solar heat gain, the louvers also serve as balustrades to the balconies, create extra depth in the facade, yield kinetic shadow play and obfuscate externalized mechanical components. The colors, proportions and textures of the two envelopes reference one another and are more like siblings than strangers.

On the interior we decided to celebrate the steel structure by exposing it wherever possible which helpfully yielded more width within the constrained lot. Those girders, columns, bolts and junction plates coupled with block and masonry are balanced with a collection of warm, soft and luxurious finishes, fabrics and furnishings. We were conscious of the depth of the spaces and the special character the light has when it stretches through the interiors; grazing walls, upholstery, bedding and tile. We designed them all in such a way to extol the virtues of that long light. Cozy, comfortable, intimate rooms but with a sense of drama and a real reflection of context. These are rooms in the heart of the Lower East Side and, as pampered as one might be within them, we wouldn’t want you to think you were anywhere else. 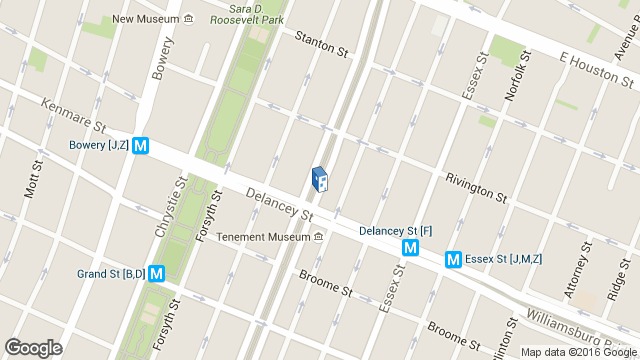