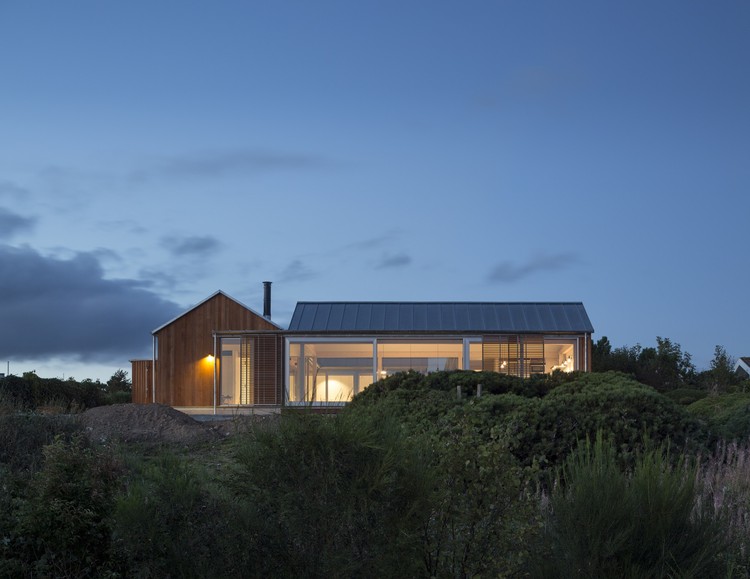 Text description provided by the architects. Four small houses enclosing a central courtyard are the basic frame-like structure for this summer residence by the shore of mainland Denmark. The exterior of the house is modest- even slightly introverted - but entering the courtyard reveals a spatially open house with a warm pinewood interior. Glass doors and sliding partitions ensure visual contact between rooms across the courtyard and also provide a clear and unhindered view over the bay.

The house is situated in Mols Hils, Jutland, on a hilltop with a view towards the bay and the nearby city of Ebeltoft in the background. A narrow road leads to the house, which is placed amongst other summerhouses and surrounded by bushes, pine, and fir trees. The four pitched roofs blend in with the surrounding summerhouses and the closed facade with sliding shutters in front of the windows gives the house an anonymous outer appearance.

The courtyard provides shelter from the heavy coastal winds. Shutters, sliding doors, and curtains can be manually moved around to create different flexible spaces and graduate the openness of the house. Glass surrounds the inner courtyard which creates a continuous interior space with more private spaces situated as closed boxes around the periphery of the courtyard. in each room, there is a private exit leading to an intimate outdoor area shielded by the surrounding bushes and trees.

Rugged outer materiality consisting of wooden planks, galvanized steel, and zinc makes for a house that can withstand the harsh coastal climate. A polished concrete floor with exposed aggregate provides a robust surface to handle the indoor/outdoor use of the house and the walls of pinewood sheets lend warmth to the interior.

The four smaller houses loosely fit different functions; an entry house with washing rooms and bathrooms, a guest’s house, a house for the kitchen and living room, and the fourth house as a sleeping quarter for the owners.

All the houses are connected in a mainly open plan structure while the differently pitched roofs emphasize a variety of heterogeneous spaces. Various possibilities of connecting the rooms across the central outdoor space in the middle make for a multi-functional house that provides a second home for the two owners both in private and when they are joined by their big family. 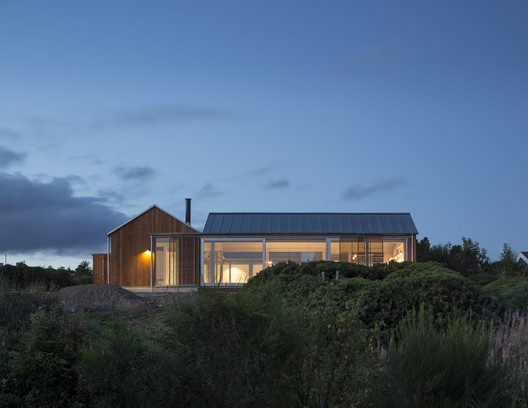