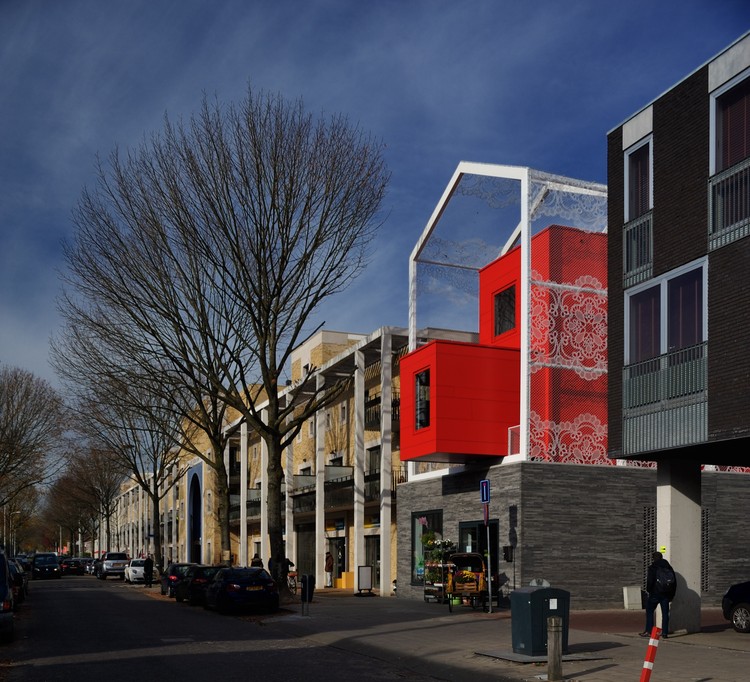 Text description provided by the architects. In november 2011 housing association Trudo launched the Woenselwestwedstrijd (www.woenselwestwedstrijd.nl), an ideas competition for architects, designers and anyone interested. The scope of the competition was to improve the bad image of a problem area in Eindhoven, called Woensel-West.

Trudo’s idea is to realise iconic buildings on 16 corners on Edisonstraat, placed on top of similar plinths. Diederrendirrix designed the master plan and will also take care of the design of the plinths. The competition focused on the first two corners, with Baeken being selected as the winning scheme for location Edisonstraat and Baekelandplein.

The site is an open gap next to a recently completed residential block. Special about this location is the fact that it marks the entrance of Baekelandplein, Eindhoven’s red light district square. This unique fact has not been denied at all.

First there’s the plinth, a heavy and dark volume which functions as a pedestal for the superstructure and adds commercial space to the neighbourhood. On top of the plinth there’s a bright red volume containing two short stay hotel rooms. It’s strange and abstract in its presence and links to the red light district directly by its colour. Over it there’s a steel structure wrapped in a spicy decorated mesh*, like  a giant fishnet stocking, referring to Baekelandplein. These two elements, volume and voile, create an exiting in between space.

The steel structure forms an archetypical house, which is silhouetted against the sky. A true local house, with its characteristic gentle roof pitch. The steel structure is also the continuation of the adjacent residential block Voltagalvani, where a structure of beams and columns is placed in front of the actual façade.

Because plinth and superstructure are kept apart from the adjacent residential building by about one and a half meter, its blind façade was kept untouched. The housing block’s façade together with the lace façade, form a vertical space in which a straight staircase goes up. The red staircase is clearly part of the superstructure, which touches the ground at this point. Via this outside staircase one steps on top of the plinth, which forms a communal roof terrace, offering unexpected urban views. From the plinth’s roof one can enter one of the two hotel rooms. The other room is accessible via a spiral staircase, which is part of the red volume. This sequence reinforces the idea of a plinth and a superstructure as independent elements.

Inside the volume oddly positioned windows offer hotel guests a diversity of views, while at the same time the obscuring effect of the voile protects their privacy, but also the privacy of the Baekelandplein visitors.

* The lace façade was designed in cooperation with Lace Fence. 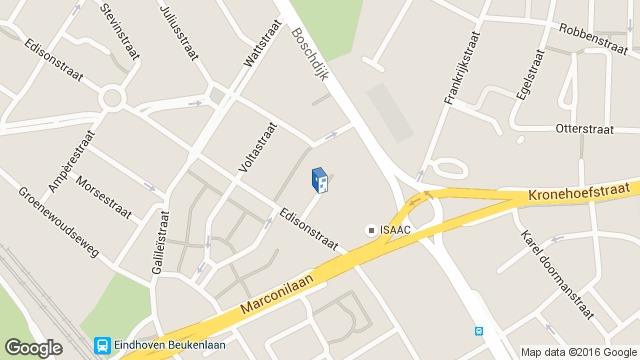 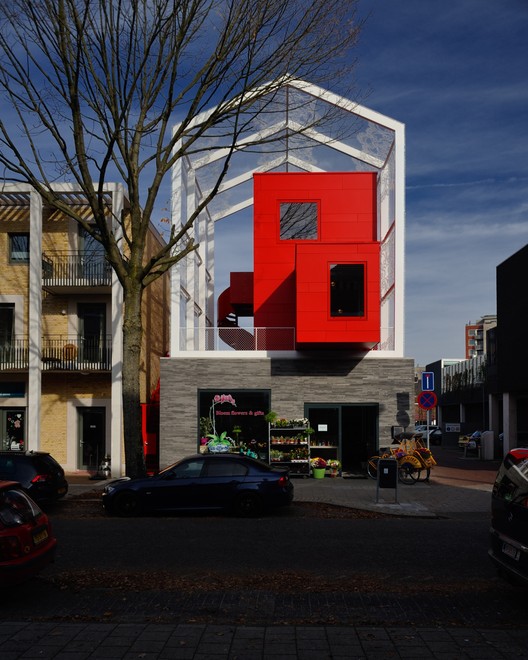