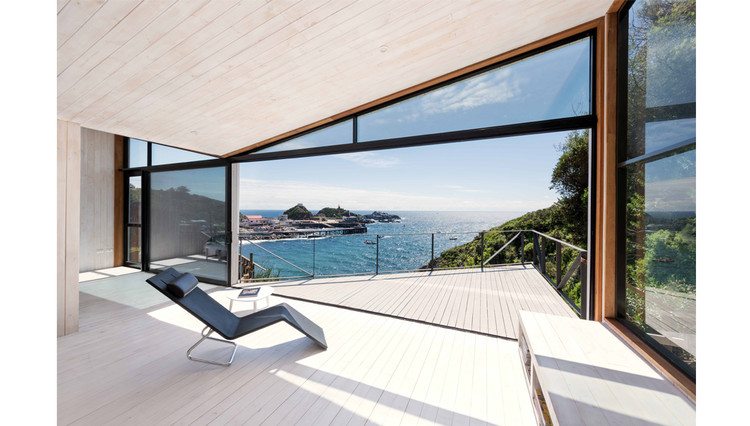 Text description provided by the architects. The client is a renowned art gallery, which thought there this place to have an intimate space which does not have the capital and also be given to artists, friends and family.

The area has a picturesque setting with panoramic views of the Pacific Ocean where stands the former whaling Quintay, now a museum open to tourists views. Also you can see exits and entrances of fishermen and boat dives groups, due to the existence of sunken ships and high transparency of its waters.

Access to land is only through a walkway that connects the upper streets of the town with the same cove. In the middle of this route, between houses of fishermen, is the place of work. This passage has heavy traffic, especially in summer times.

This is a fundamental condition when designing the new volume and its relationship with the surrounding environment, which seeks to protect and give privacy to the interior of this house on this very busy border.

The interior space is resulting in their relationship with the "four edges" that make up the support on which this volume is based;

First edge (south), access to the land from the walkway. It was decided to create a closed and sealed facade, to achieve intimacy of the interior, but as high as possible, to capture run through a skylight natural light winter.

Second edge (east), access to the interior. It was decided to create specific openings, to allow access to natural light in the morning, and maintaining privacy in relation to neighbors.

Third edge (north), green cliff. It was decided to give the inside as high as possible to the edge, so that through a large window, it is framed as a big green box, which presides over the main room.

Fourth edge (west), Pacific Ocean. It was decided to generate most visual and physical opening (to the terrace), to generate a continuity between the inside and the outside, and thus enhance the panoramic ocean views and to value the former whaling.

To maximize interior, and maintain a single space, a loft project for 2 people, located on the kitchen, which is accessed through a sliding ladder.

The Loft was built in a very economical and efficient thermally, for which panels were used Sip of 162mm and 116mm for the floor and walls and roof. For setting Low-e glass facade, improved by 35% thermal insulation capacity installed. Further it contributes to reducing the burden, solar radiation enters through the DVH. Both floor panels, wall and roof, were coated with pine wood, planed and treated pine exterior, all painted with a product based on natural oils and waxes. 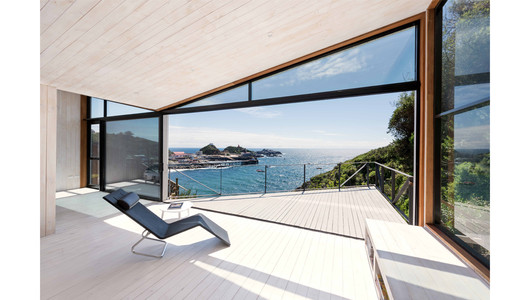