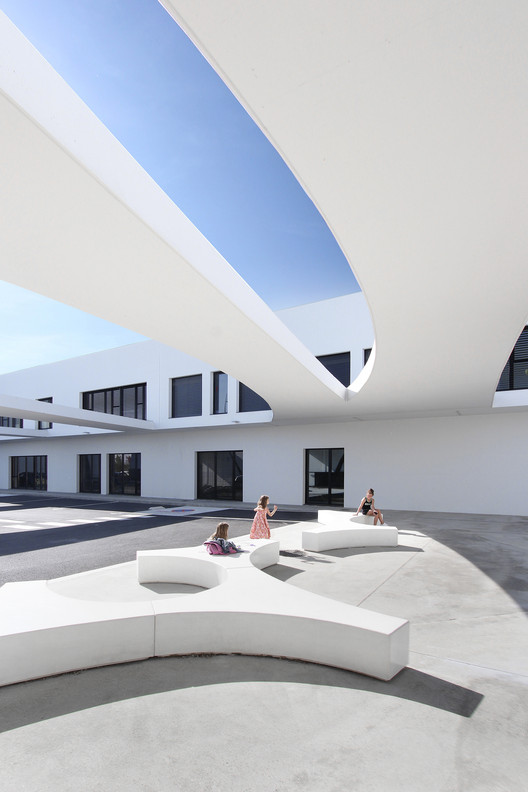 Text description provided by the architects. Within the ZAC Andromède area, the site devoted to the plan was an insulated plot, which would have developed into a boulevard and it hasn’t been accomplished within the kick off of the construction site. It was therefore a question of realizing a school complex keeping in mind the ZAC regulations, especially concerning the density of the urban population on this site, which still had to welcome any sort of building.

The one and a half hectare ground is flat, next to a housing estate, whose houses had a view before on a three-year crop agrarian ground. The perception of our project plan from these pavilions had to be as nice as possible. In the southwest area, a special attention must be paid to the management of solar provisions, in terms of brightness in the cool season and excessive heating in the summer period. The pivotal idea of the project and its main articulations.

This plan of the school complex "Les Perséides" is the first school building in the Blagnac area of the new eco-quarter Andromède, in the northwest area of Toulouse. It marks the lasting urban ambition of architectural complex revolving around concepts between an open landscape and a city garden.

An initial realization of the Boulevard Persée, the school of the neighbourhood is designed to be an urban landmark, a place of exchange and friendliness. It is the objective of this contemporary building, perfectly inscribed in the urban and architectural line created for the ZAC.

Actually, the school complex presents a clear urban volume, in orthogonal forms, built along the alignment of the Boulevard. In front of the boulevard in the open landscape, the architecture on the streets marks the desired urban population density by the town planners Treuttel-Garcias-Treuttel.

Presenting all these features, the facade on Boulevard is such an urban sculpture so immaculate and crenelated, enlivened by rippling arabesques. This carved envelope unveils the functions sheltered behind this white outer skin: the school, the sport centre, its square and the car parks. This peculiar picture of the building illustrates the symbolism of protection and the republican shrine feature of the school. The self-consolidating concrete is the best material to assert these ideas and forms. Cast on big heights, flexible, sometimes post tension, this type of concrete gives this smooth, unified, massive skin. White and shaped, it reminds at the same time of childhood innocence and of the curvaceous shape at the heart of the block.

Beyond the building constructed on the southern front, the plan is organized flexibly, in an iron horseback shape, revealing at the centre of the urban complex the space devoted to the children. These play areas, protected from the outside, are as a  chrysalis opening in the Northern area with well-designed environmental and play developments.

In the plot, the functional and environmental approach gave life to a project presenting volumes and a curvilinear organization. The areas devoted to the children are then organized with attention and a quality design.

The building is organized therefore in two flexible wings, whose height is progressively reduced in the dynamic movement of the plant roofing. This lace of greenery, a recurrent feature of the plan, waves in the wind embracing the school in a protective silky sash. Therefore, in the heart of the urban block, overlooked by the plant row, the play areas resemble to a big roofless space, sheltering children's games.

From the outer public space, the child reaches the school walking along the thick facade of the square between the Boulevard Persée and the building. The foyer of the reception, the building’s pivotal point, serves all the educational and recreational areas.

On the ground floor, the east wing leads to the five nursery school classrooms, accessible by a hall livened up with bright patios and alcoves. The classrooms are linked directly with the courtyard reserved to the toddlers and the resting rooms with a view on an imaginary garden at the bottom of the plot. The canteen takes all the ground floor of the west wing.

The monumental staircase of the foyer leads to the primary school floor. The high landing benefits from two play areas painted in fresh and clear hues, silent witnesses of children's secrets.

The multimedia room and the library are directly accessible from the upper landing. The teachers’ room and the areas reserved to the personnel are in the middle overlooking the courtyards.

The areas are meant to be comfortable and of easy access in all their functions and are planned to create smooth movements. The school is bathed in natural light. The classrooms, mainly southwest orientated, have a framed view and its exposure to sunlight is well managed. The opening are well orientated, with sober rectangular proportions which do not overload the curve of the internal facades.

Ten primary classrooms, broadly glazed, have a view on the grass roofing. They are in the background and sheltered from noise while the play areas are visible and exposed.

Finally, a sport centre covers the car park area on the ground floor. Of public and private use, it is accessible to the school but also directly from the outside.

The thermal insulation of the building presents a hermetic envelope created by the inertia of the concrete used for the building and the thick grass roofing. The installations are automatically managed to optimize time and operating costs. All these implements allow to acquire a low energy consumption building, RT on 2012.

The eco-responsibility, the orientations implied by the building, the functional articulations contributed to create this project, according to the regulations of the program. Within the eco-quarter of Andromède still in progress, we accomplished this school complex presenting a specific identity, a key equipment of a new neighbourhood, unanimously appreciated, at the end of an active school year. 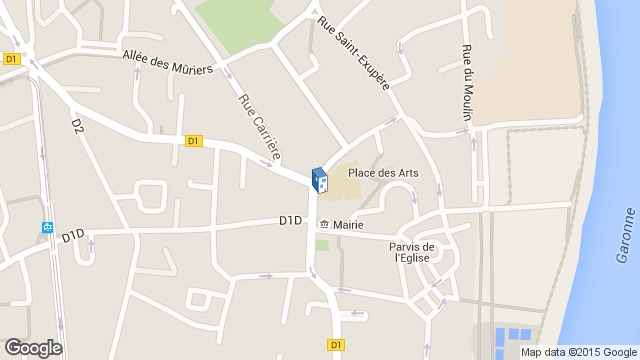 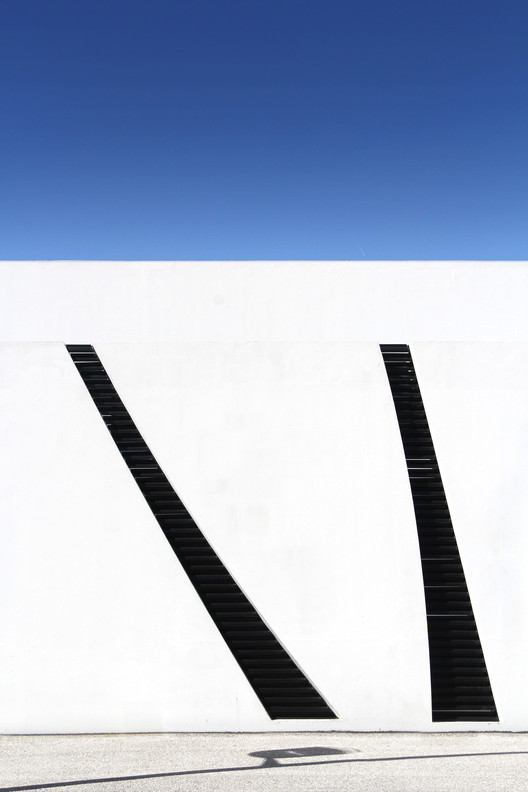