Taller EC (TEC) has released the plans for the Plaza Artesanal Reina Victoria, a cultural project located in the northern, central part of Quito, Ecuador. Situated in front of a traditional artisan’s market, the new proposal consists of a set of autonomous pieces of different sizes connected by an interior plaza.

The goal of the Plaza is to promote the trade of national crafts in an appealing environment, so the outside of the structure will feature indigenous murals as a transition and invitation into the space.

The project features distinct public spaces on the upper floors, including “a traditional market stimulated by several complimentary activities that promote the nationally developed craft trade as a domestic and international tourist attraction.”

Housing underground parking, around 50 small-scale enterprises, restaurants, a cultural center, and an outdoor space, the Plaza is intended to become a cultural icon and urban catalyst for the area.

The project is expected to be completed in the second trimester of 2016. Learn more here. 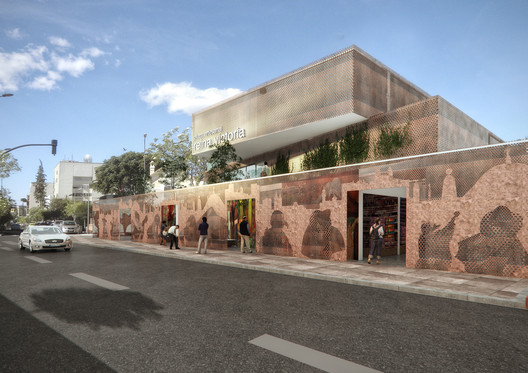