The overall design concept focuses on enhancing the iconic value of the city and creating a new, high-quality environment for life, work, and recreation. These goals will be met through an enlargement of the peninsula, and larger city plan of a waterfront park, solid blocks, and enclosed urban courtyards to define the city’s layout.

Above the urban blocks, towers will form a higher layer “topped with gold-colored spires in the tradition of St. Petersburg’s architecture, a unique landmark silhouette of Vasilievsky Island [that will evolve] and create an expressive, recognizable, and iconic image.”

A-Len from St. Petersburg was also awarded first prize, and thus, both teams will participate in further elaboration of the project. 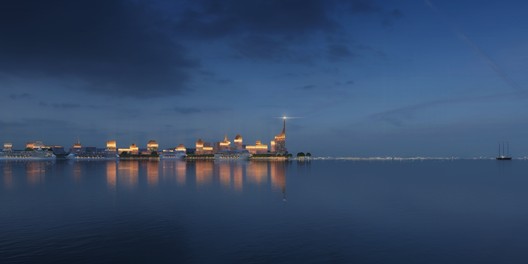