The Colossus of Rhodes, a thirty-metre high sculpture depicting the Greek Titan God Helios that once stood guard at the entrance to the city's harbour, may be realised once again. Standing for only 54 years until it was destroyed by an earthquake in 226BC, its position in the ranks of Seven Wonders of the Ancient World has become almost mythological. Plans to construct a new, much larger inhabitable statue—that will stand almost four times taller at 122 metres—have now been put in motion by a small collective of architects, engineers, and tourism agents.

Topped by a "crowning lighthouse," the proposed new Colossus would house a library, museum, cultural centre, and exhibition space, estimated to cost in the region of $250million. Learning from the previous Colossus' untimely end, this version—although far larger—would be able to counter the effects of earthquakes. It's golden skin, though reflective, would comprise of solar panels to generate energy.

Although no construction date has been set, primarily because the group plan on crowdfunding the majority of the capital required, the idea of an ultra-postmodern monument resurrected from legend might just be enough to capture global interest.

What are your thoughts? Leave your comments on the new Colossus below. 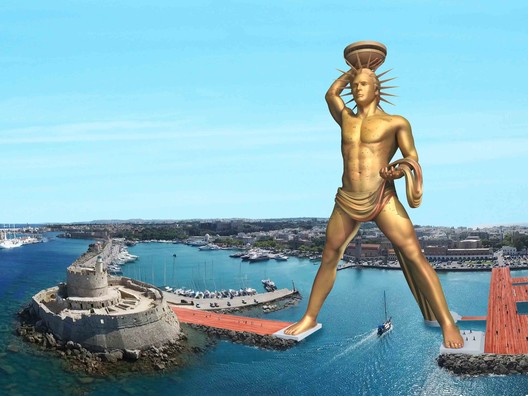