"I want a house. A house to live in, not a scene to look at," writes homeowner Charles Wiriawan in one of his blog posts. Situated in the increasingly crowded West Jakarta are, the 159 sqm house occupies a 196 sqm plot of land. Size-wise it is inconspicuous, but its exposed concrete facade gives it a distinctive look. The architecture of Bare Minimalist blocked the heat by completely walling off the west side of the house while opening the rest to let air and light in. The house has no receiving area, no wall, and no living room. In their stead is a spacious lounge. " After the lounge, the kitchen also takes some importance its final layout is the result of few adjustments based on the owner's domestic habits. The only enclosed space in the first story is Wiriawan's study, which doubles as a home theater.

A simple foyer and a light well with generous footwear storage- guests are to take off and store theirs there before entering-precede the lounging area. The second story houses private spaces. At the end of the corridor is a 5 x 6 sqm master bedroom equipped with en suite bathroom and a walk-in closet. An outdoor showering area is attached to the bathroom, while the door connecting its indoor and out door area is made of clear glass.An additional bedroom, bathroom and a multi function room linked by a corridor leading to an open space beside the void leading o the stairwell and stair case, a pretty bow to knot the horizontal and vertical circulations together.

The project installed a drinkable water tap in this open space. While pure, safe to drink tap water is increasingly common in some countries, it is still a rare, exceptional facility in Indonesia, one that this project was determined to have in this home. 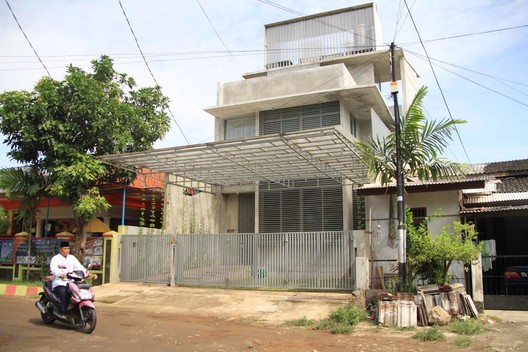