It’s a rare event when a public building is striking enough to grab the attention of most Angelenos. It’s even more curious when that building is almost unanimously panned by the critics. Barring the so-called “iconic” buildings that our city has collected over the last 15 years, Los Angeles seldom received exciting public architecture. Because of this, every new major addition gets placed under a cultural microscope. Now, with Kohn Pedersen Fox’s redesign of the Petersen Automotive Museum nearing completion, architecture critics have sharpened their knives: reviewers have called it “kind of hideous,” "the Edsel of architecture," and “the Guy Fieri of buildings.” But these gripes completely miss the point of what a car museum on the Miracle Mile should be. 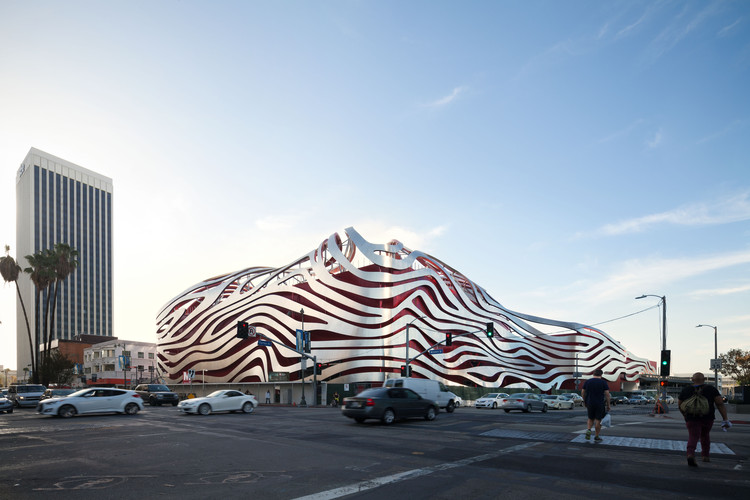 As architecture students, we’re taught that good architecture should have purpose, that every design decision should have a rationale behind it; otherwise it’s just sculpture. These views are well summed up by Frank Lloyd Wright, who supposedly once said: “Form follows function - that has been misunderstood. Form and function should be one joined in a spiritual union.” KPF’s Petersen Museum, however, is in violation of this sacred rule. Perhaps that is what rankles critics... and charms me.

The new museum’s unique double facade makes a bold statement. It’s composed of an inner shell of red corrugated metal sheets that enclose and disguise the boxy original structure, and an exterior facade of wild riveted steel ribbons that serve no structural purpose as they engulf the building in a joyful display of sheer exuberance. The sinuous streamers attract and delight the eye. It looks like Porsche’s next concept car- a whimsical sight to behold. The re-conceived facade might not have functionality, but it plays to its demographic. The ribbons are a smart marketing decision. They communicate a “fast things are held within” look far better than the blatant advertising and cantilevering NASCARS that adorned the previous building. The new design screams speed and fully embraces its superficiality and the character of its city. The Petersen is now more of a profile picture backdrop than it is timeless architecture - and that’s OK.

Wilshire and Fairfax is an absurd intersection, and any notion that architecture on the Miracle Mile should have austerity no longer makes sense. The Petersen is surrounded by the golden cylinder of the May Company building, Johnie’s Coffee Shop (a historically protected filming location that hasn’t served an actual patron in decades), the La Brea Tar Pits, Michael Heizer’s boulder, Chris Burden’s lamps, a section of the Berlin Wall, and soon, Renzo Piano’s alien orb, along with whatever the heck Peter Zumthor is up to at LACMA. There’s a reason why this is a starting point for the Ciclavia route. People come here to gawk. And gawking is fun.

To consider the new Petersen a tasteless structure is to call a hot wheels car immature. There’s a reason most Lamborghinis sell in neon yellow and why Teslas feature a “Ludicrous Mode”: cars are intentionally ridiculous to appease our inner child. A shrine to the the automobile should reflect that. The Petersen Automotive Museum is a detuned theme park for gear heads. Its undulating exterior is wonderfully playful, and that’s why it’s so fitting.

Thomas Musca was the assistant curator for the Architecture and Design Museum’s 2013 exhibition Never Built: Los Angeles. He is currently studying architecture at Cornell University.