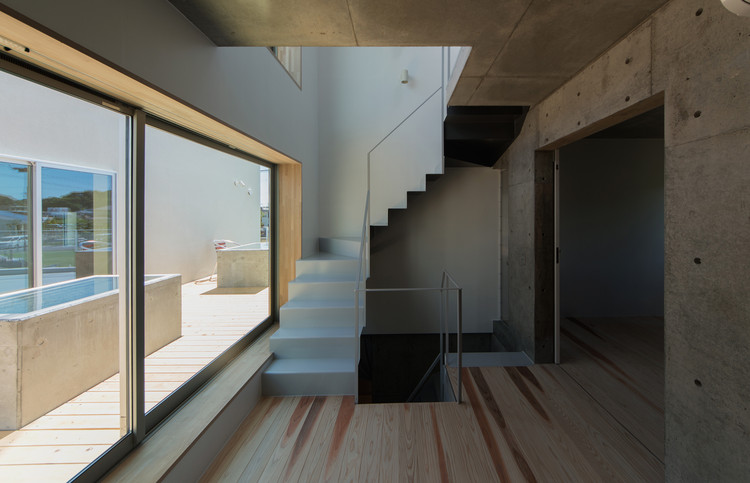 Text description provided by the architects. Szki architects implemented the design for ParkHouse Kikugawa that is located in Shizuoka prefecture, Japan. Kikugawa is a new residential area. In this area, there is a park on the north side which gives a beautiful green scenery to the area where local young families with children gather for play and relax on a daily basis.

Since the biggest earthquake and tsunami occurred in the northeastern part of Japan back in 2011, the population of this area is emerging because of the people moving from the coast side on the crisis management purposes from the natural disaster.

Historically this area has played a role as an agricultural district. Thus, the town is designed to leverage its native geographical feature.

This town is planned to be emerged up by the climate of the park which will observe the town for next hundred years. Potentially ParkHouse Kikugawa was constructed to be a prototype of this town that will show well ordered identification with a center of the park.

This architecture utilizes the most out of nature energy resources of the park, such as wind, light, and atmosphere. This natural environment adds vivid color to the architecture.

There is a big terrace in the center of the site that is shared with the whole family where they can coexisted as both physically and environmentally.

The first floor is the common space for the whole family and is designed for people to feel the five senses. Entry of the light, the way of the reflection, the color of a sound, and many other places approaches each of the five senses. The rotating mirror becomes the blindfold wall and full-length mirror, and is utilized as a daylight-gathering unit as well.

ParkHouse Kikugawa is designed for a family of seven persons with three generations to cohabit. The request of the client was to divide into 18 spaces in a summary of the architecture. These spaces were divided loosely not finely. Thus, a short line of flow and compact placement contributes accessibility to live.

The structure of this architecture is formed like a sponge because of the open space available throughout there. Line of sight goes across to outside through three or four layers of this open space. Therefore, the reflection of the window produces a feeling of surrealistic floating, and the trees of rotation are reflected into rooms.

The table placed in the the terrace is also toplight and produces small communication among family member. The anchors are screwed into all parapets. The client can install wire ropes there to build a half-outdoor space and a green curtain.

The problem of a new residential area is very acute, though mass house construction has been conducted without facing up the issue. The park which is continued to observe this town for next hundred years might be a big hint for this problem.

Dotted lines shows visual lines. Waved lines shows wind flow. The house itself is created in the designed small space; however, it is well-devised in order to blend into the park.