Heatherwick Studio has designed a mountainous mixed use plan for Shanghai's main arts district. Named M50, the 300,000-square-meter project was conceived as "a piece of topography" that takes the shape of "two tree-covered mountains" populated by "400 terraces" and "1000 structural columns."

“Normally, the large-scale projects that we are quite used to seeing have big boxes, and the role of the designer is figuring out what pattern of architectural wrapping paper to put on these boxes,” said Thomas Heatherwick, according to Architectural Digest. “We wondered if there was a way to make better working spaces by also making access to outdoors.”

The 15-acre development, currently under construction with completion scheduled for 2018, is sited next to a public park. It is split by a narrow strip of government property and incorporates a number of historic buildings.

The project is currently being exhibited at the Cooper Hewitt Smithsonian Design Museum in New York as part of "Provocations: The Architecture and Design of Heatherwick Studio" through January 3, 2016. 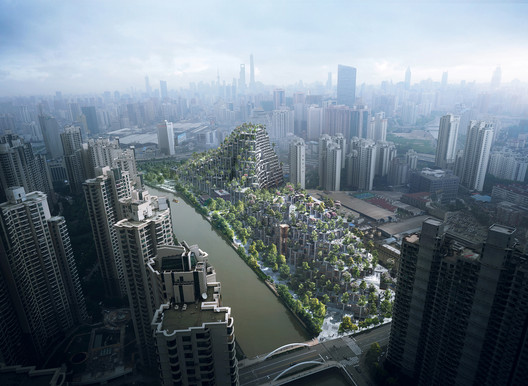