Kengo Kuma & Associates have been selected to replace Zaha Hadid Architects to design the new Tokyo National Stadium, the central venue for the 2020 Tokyo Olympics. Kuma's design was revealed alongside one other, a design by Toyo Ito, last week, after the original design by Zaha Hadid Architects was scrapped earlier this year. As reported by The Japan Times, Kuma's design narrowly won out against Ito's based on nine selection criteria by the Japan Sport Council, being awarded 610 total points compared to Ito's 602. Responding to concerns about the size and cost of Hadid's design, the new design will be under 50 meters tall and cost an estimated ¥153 billion, compared with the 70 meters and ¥252 billion of Hadid's controversial plans.

Reaction to the new design has been mixed: The Japan Times quotes Japanese architect and critic Takashi Moriyama who stated that the new design's timber structure and greenery "is a good match" for the area, and last week claimed that the designs by both Kuma and Ito "may globally impact architecture" thanks to their use of wooden structure in a large building. However, the newspaper also notes that commenters on Japanese social media have already dubbed the new design the "hamburger."

Hadid also hit out at the new design this morning, accusing Japanese authorities and architects of "colluding to close the doors on the project to the world." She claimed that the decision to drop her from the design "was not about design or budget" and added that "In fact, much of our two years of detailed design work and the cost savings we recommended have been validated by the remarkable similarities of our original detailed stadium layout and our seating bowl configuration with those of the design announced today."

The new design is expected to start construction in late 2016, with an expected completion date of November 2019.

Story via The Japan Times and The Telegraph. 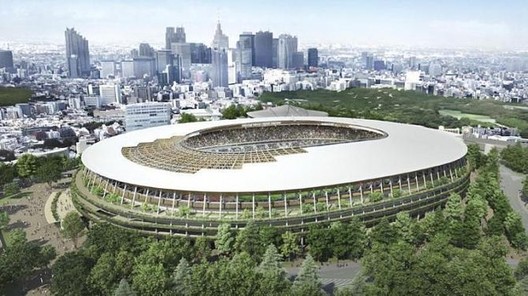