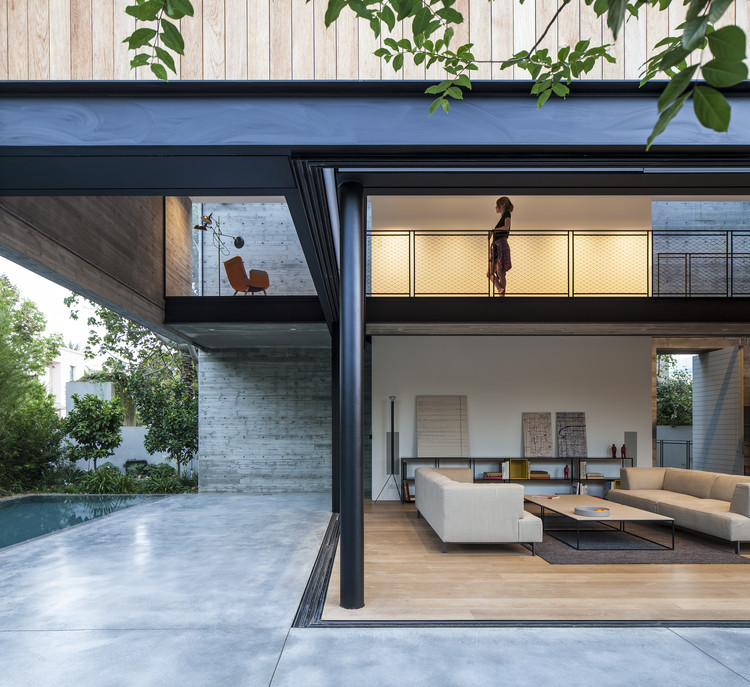 Text description provided by the architects. Technological advances of the industrial revolution, which allowed the use of iron and concrete building blocks of the building brought with them the Gospel of modernism and the principle-front front free of static load balancing, transparent or opaque, Spacey or detached film shows the long separation of external and internal.

SB HOUSE Is it building envelope architecture serves as the generator, trolling the exact dosage between interior and exterior relations, climate and considerations of privacy, rising from the ground, surrounds the spaces required and return to the ground in the packaging as a challenge to the forces of gravity-transparent, thin and still serves as a wrapper for the floor and rugged a massive drifts and surrounds the entire House. The operation of cement sheath around the House produces a fascinating balance between system open and close and fills the House with various types of intensity of light, these streams pouring concrete and emphasizes his sensuality.

A concrete way does not meet as a component along in construction-but supported and supports integration of steel beams and pillars to wooden boards used as a covering of floors and shutters in front of three material that constitute together the construction of all concrete is cast as were dismantled and put together again in the final casting phase as they put together an entire relationship cannot be balanced.

The entrance to the House is done at street level, through driveway that puts visitors in front of a wall with sealed open. Other shell walls produce different relationship between blocked and exposed when common is seeking a delicate balance point between these two variables. The facades can be read as abstract painting, may BLOBs and lines are arranged into irregular composition that produces a new order indeed-the House itself corresponds with the modernism of the 1950s that also organize a non-symmetrical compositions minimalistic but unbalanced.

The experience of standing up against the wall sealed entrance sells architecture  from Egypt's temples and fortress buildings, palaces, churches and more-everyone aspired to produce a change in the perception of visitors for various reasons, all of them broadcast on option and disconnect, move and approach, foreign and domestic.

From the entrance hall is the confluence of linked transactions the transactions in space himself and his passages from two sides of the Hall to the other spaces, like the movements themselves confined between two walls that produce open glance toward the sky framed and thus emphasize the transition between interior and exterior, which increases with the session and the initial living room is revealed towards the open garden, closed, open.

The living space and kitchen area are producing a series of public spaces including the kitchen, living room, living room, garden and pool and surprise in the sense of openness that no tapering at the experience. Covering the floor made in natural wood panels – these look like landed down after casting the concrete roof's bare and left him nakedness-rows of molding.

Children's rooms are located on the lower level lit throughout by the sunken courtyard and watched the entrance while the master bedroom is on the upper level is open all the way towards the North at wood blinds vertical lender allow controlling the light and exposure.  Prolongation of brisolei shutters throughout the roof key blurs the dividing inner spaces and underscores the General Prism, the resulting front explains the operation and fold the cover makes the concrete around the residential spaces as stroctoralit-the complex using one element of the page in its own right, Interior and exterior, as abstract sculpture. 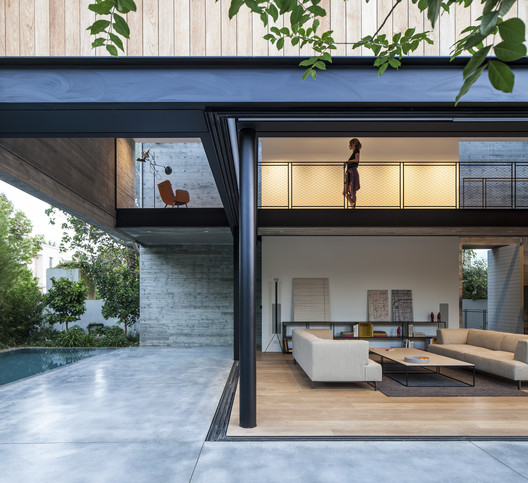