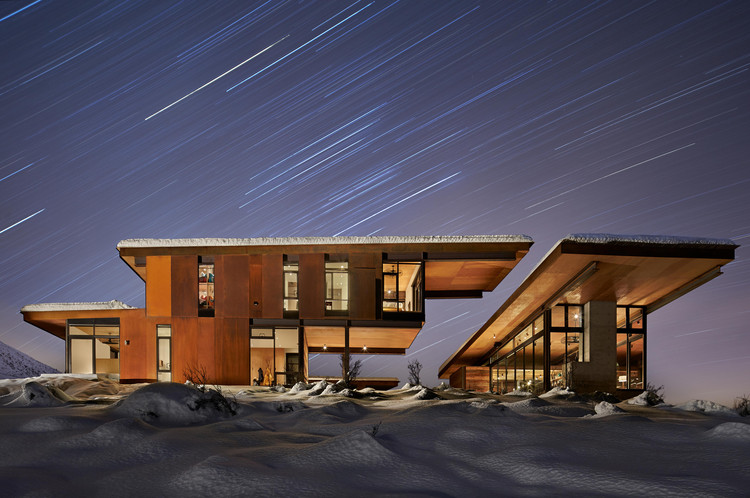 Text description provided by the architects. The sixty-mile-long glacial Methow Valley, in the northern Cascades of Washington state, is a special landscape, with a climate that ranges from hot, fire-prone summers to winters with heavy snow pack. It’s a true four-season landscape—the landscape I grew up in. Our clients wanted to build a second home here that would be a kind of adventure home for them and their kids. They are great parents and always undertaking adventures as a mindful, deliberate way of developing memories as a family.

In this location, a house that’s all about adventure is one that forces you to be outside and engage actively with the seasons. You have to go outside to get inside. So the house has inconveniences, but the clients and I see them as terrific moments, unforgettable moments. Adventure is about inconvenience in that it reaffirms and reminds you of where you live. I used to climb mountains, and while it may seem romantic, it’s also uncomfortable. And scary. You’re cold, hot, sore. Why would anyone do it, if they thought about it logically? But it’s about engaging life vigorously.

The house is composed of four buildings, centered on a central courtyard and pool. They are unattached but grouped together as a riff on the idea of “circling the wagons.” It’s like a little campground, and you go tent to tent. The materials are tough on the outside, because of the high-desert climate, but the inside is cozy, like getting into a sleeping bag—protected, warm, and dry.

Each building has an amazing, carefully composed view of the surrounding Studhorse Ridge and Pearrygin Lake. The “public” areas, such as the family room, kitchen, and bar, are grouped together in a structure that opens up almost entirely, with sliding glass windows all along the walls. The master bedroom, kids’ bedroom, and den are in another building. A third is for guest rooms, to allow guests their privacy. A sauna is in a fourth building with a private, framed view looking out over the valley.

The site was completely empty when we began, except for that rock! It is a glacial erratic—a rock that glaciers drop as they recede—and it became the center point for the project. It’s relatively close to the bar, so it becomes a place to sit, or put your drink. I thought of it as a big piece of furniture.

The design embraces family life and entertaining. For example one wall with a TV can either face inside or open up to face the courtyard. If there’s a game on, everyone can watch from the pool area. There’s also a Coney Island aspect to the bar, where you push a button and the walls open up. It has turned out to be a particularly successful part of the architecture. Everybody hangs out naturally at the bar, and the fact that you can open it up is important to the inside-outside relationship we were seeking to achieve.

The wood siding used throughout the project was salvaged from an old barn in Spokane. The varying tones of the wood reveal its history and use. The glass is very important. I have never liked being in a room that doesn’t feel like part of the outside. I always like to take the amount of glass I’m allowed per code and, rather than sprinkling it around like pepper, concentrate it in one place to make a vivid connection to the landscape. 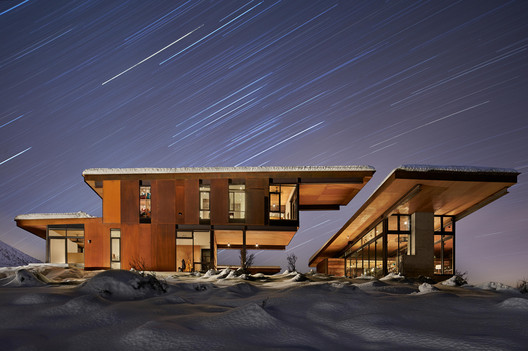