The Japan Sport Council has unveiled images of two designs now in the running for the new Tokyo National Stadium, the city's headline venue for the Tokyo 2020 Olympics. Named simply "A" and "B," with no hints yet as to who the architects might be, the designs replace a proposal by Zaha Hadid Architects that was controversially scrapped in July after fears about cost increases from the government and a petition against the design from prominent Japanese architects.

According to The Japan Times, the two new designs were both designed by Japanese architects. Both feature wood prominently in their design, something which prompted Japanese architect and critic Takashi Moriyama to tell the newspaper "I think the idea of using wood in large structures may globally impact architecture."

Along with their wooden structural elements, design A features multiple levels of greenery covering its exterior facades, while design B features open space between the external structure and the sloping stands, a design which Moriyama added "carries over the atmosphere of the old National Stadium." 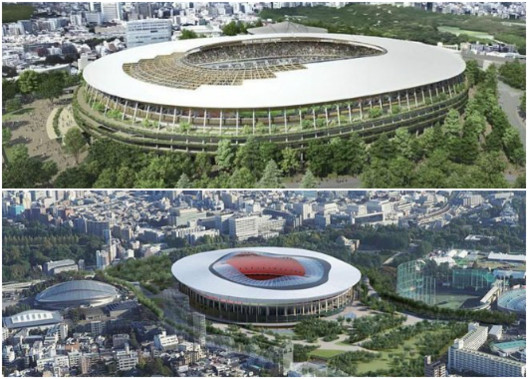