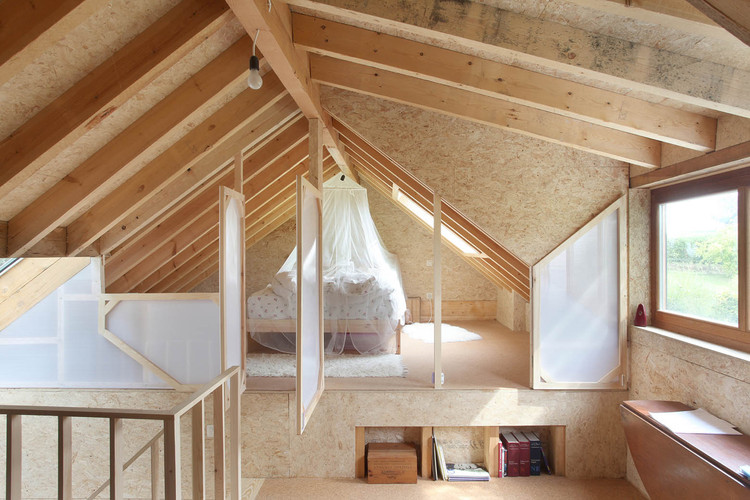 Text description provided by the architects. This shoemaker’s workshop located in the countryside near Louvain-la-Neuve was converted into a single family home. Built in 1950, the central building was supplemented over the years with annexes to the west and the east. This wooden building made of bits and pieces has the appearance of a “homemade woodstock cottage”.

On the contrary, the whole house is semi-buried and leans against a sturdy supporting brick wall conferring a sense of stability to the construction. Originally covered with coating, this wall was exposed during the renovation to valorize its constructive character. Following a fire in 2012, the roof had to be rebuilt. Despite limited budget, the goal was to make the most of the house’s volumes. The rooftop was slightly heightened and original elements of the framework were removed to restore the importance of the central space as a «foyer».

The night time spaces were organized in the annexes flanking this large central volume. In the west, the lobby and the garage were also lowered by 60cm to add a floor under the roof. Its reduced height makes this space including a bedroom and a music room cozy and flexible. To the east, two other bedrooms were placed, one with a mezzanine. 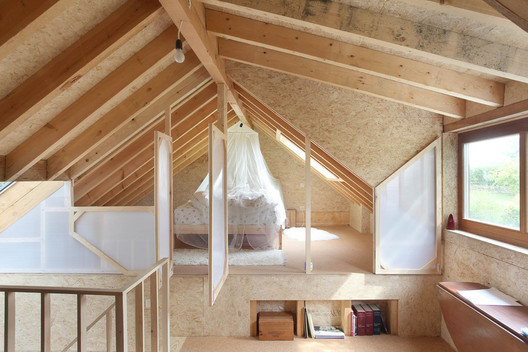