Save
How I Developed Ergo Kiwi, an Ergonomic Craft Knife that Your Fingers Will Thank You For
Share
Or
Copy

If you've been through architecture school you're probably wary of craft knives, which can puncture the skin of an non-alert, caffeinated student at a fraction of a second's notice. Even if you manage to avoid the hospital, though, these scourges of the studio still know how to hurt you: their designs are the antithesis of ergonomics, making a marathon modeling session a mighty endurance battle against hand cramps and joint pain. Aiming for a more comfortable solution, architecture graduate Sean Riley developed the Ergo Kiwi, and today is launching a Kickstarter campaign to help bring the product to market.

In addition, Riley has also meticulously cataloged his design and production process. At ArchDaily, we thought it gave a fascinating insight into not only the design of Ergo Kiwi, the but the steps involved in developing and bringing to market a convincing product. As a result, we invited him to share his story. 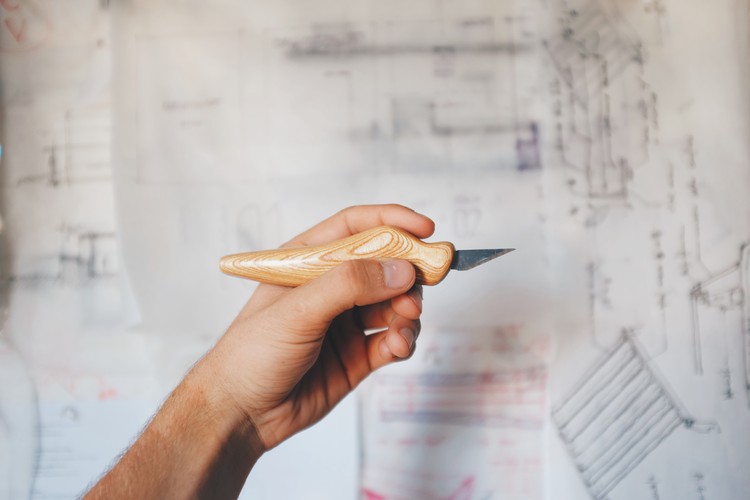 The idea came about in my first year of architecture school. Our studio professors had suggested we use the knives that come in a preassembled package of tools that would get you through your first year of architecture school, so we were using the horribly uncomfortable pen knives that killed your fingers after using them for hours. So I analyzed the cause of the pain. It's caused by a hyper-extension in the first joint in your index finger. So I made a quick model that eliminated the hyper-extension.

I made my first model out of sculpting foam but couldn't use it to create a working prototype, so I had to duplicate the handle out of wood. This took some time so I started making them in my mom's basement, spending 8 hours a day sculpting handles and analyzing them.

Process shot, analyzing the blade that would be used with the handles along with multiple prototypes.

Once I had a form that I was satisfied with I created a template so I could cut as many blanks as I needed. Afterwards I would sculpt them with a Dremel and hit them with a belt sander.

After making a few iterations I had students at the Boston Architectural College beta test them. I'd analyze the way they held the handles and made adjustments based on my observations. Every person has a different size hand and holds the handle differently so I made sure to include that in the prototype.

Here are some handles with notes from beta testing sessions.

After about a year of research and development I finally had a handle that I was satisfied with. It's now the combination of 7 different orientations of cutting ergonomically.

At this point it was time to make some 3D printed models. I had to teach myself the 3D scanning software (NextEngine 3D scanner) as well Rhinoceros (3D modeling software) so I could modify the 3D mesh that the scan created. After that process, which took about two months, I was able to 3D print prototypes to send out to architecture firms to be beta tested some more.

3D printing a prototype. At this point I added a magnet inside the handle to hold the blade in place.

After testing the handle in a few model shops at architecture firms in Boston, the only complaint I received was that the blade would get stuck in thicker materials. So I added a latch which utilizes the prefabricated hole in the blade to lock the blade in place.

At this point, which is about 2 years into the project, I partnered with a marketing firm to help me bring this thing to market. They suggested I make a wooden handle, so I used my skills as a digital fabricator to CNC rout a handle. This is a rendering of the toolpaths created to cut the handle out of a plywood blank.

The blank being milled. I used Baltic Burch plywood with 1/64 inch (0.4 millimeter) layers to show the contours of the handle. The stepover on this finishing pass, which is like the resolution, is set to .005 inches (0.1 millimeters) so in the end you have a clean precise handle. Each handles takes about an hour and half to mill and another 30-50 minutes of finish work.

Here is a rendering of the internal workings of the Kiwi.

So the project gained some interest and I was asked to present it around Boston at design events and architecture firms. This is me presenting it in Cambridge at a SectionCut event.

You have no idea how nervous I was, there were probably 50-60 designers, architects and students there, but I nailed the presentation.

All the packaging was done by me. This is a laser cut box that I've designed for the plastic injection molded handles.

Each wooden handle comes in a handmade canvas bag.

The Kiwi is the result of two years of beta testing and development. It’s the combination of seven different orientations of cutting ergonomically. The organic form of the kiwi allows you to hold it in any position that is natural for you. The Kiwi is also bi-laterally symmetrical so both left handed and right handed people can use it. There is a magnet embedded in the handle to hold the blade in place, which also allows you to pick up a blade safely from any surface as well as makes for easy storage. It will stick to almost any metallic surface. The latch on the handle utilizes the prefabricated hole in the blades to prevent it from getting stuck in thicker materials. The handles will be available in both plastic and wood, as I wanted to make a mass-produced affordable version as well as a hand crafted handle that displays the beauty of the shape.

Currently I’m working on getting funding for the first round of production. The plastic handles are made in America and the wooden handles are fabricated by me in Boston, MA. Today we’re launching a Kickstarter campaign to hopefully raise the funds and bring this product to life. It’s been an amazing learning process and I’m glad that I could share it.

Some glamour shots of the Kiwi:

You can back Ergo Kiwi on Kickstarter here.

NewsArticlesModelsModelingModel MakingProductsErgo KiwiCrowdfunding
Cite: Sean Riley. "How I Developed Ergo Kiwi, an Ergonomic Craft Knife that Your Fingers Will Thank You For" 19 Jan 2016. ArchDaily. Accessed . <https://www.archdaily.com/778556/how-i-developed-ergo-kiwi-an-ergonomic-craft-knife-that-your-fingers-will-thank-you-for> ISSN 0719-8884
Save 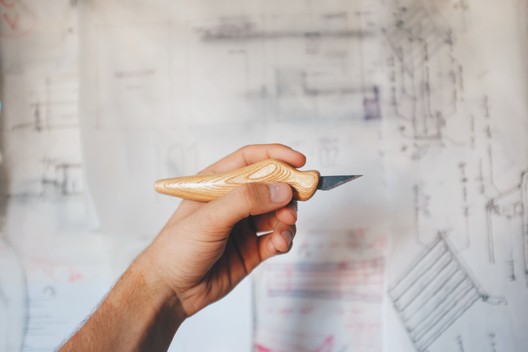