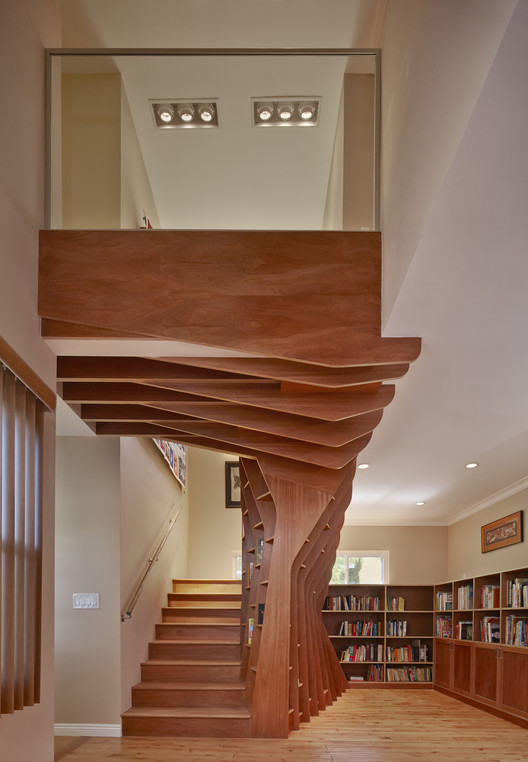 Text description provided by the architects. SlrSrf is a compact project that embeds performance characteristics into the architectural surface. Optimization of the roof as a solar receiving surface for photovoltaic electrical production generates the form of the 450 square foot (42m2) addition and renovation of an existing house in Culver City, California.

Coupling the client's desire to create a net zero electrical consumption with the generation of the form provides an opportunistic strategy to integrate performance with the sculptural nature of the architectural entity.

The orientation of the addition's roof covered with photovoltaic panels is optimized to receive maximum solar energy for the global position facing due south and angled 17 degrees from the horizon. The roof surface area is sized to fit the required quantity of PV panels, thus creating an overhang on the north facade.

As a result, the north wall is thickened providing an opportunity to relocate the mechanical systems typically in the attic into the thickened facade, thus leaving the ceiling of the interior environment higher for increased light and air movement. A large north-facing window creates a visual connection between the children's playroom and the exterior patio space while admitting ample indirect daylight.

With the addition, the center of gravity shifts towards the rear of the house. A new stair is located in the double-height void between the existing and new addition and simultaneously re-centers the house while creating a visual and spatial connection between the first and second floors.

The new stair is located where the library was previously, but instead of displacing or shrinking it, the stair is integrated with the library shelves. The new stair-shelf hybrid combines the stair's risers with the bookshelf vertical supports in a gradient organization that gradually opens toward the main living space.

The materiality of the stair/ shelving system, consisting of Brazilian Cherry wood, expresses itself as a distinct system bridging between the new addition and existing house. The distinction of the new stair/ shelf/ bathroom core emphasizes the focal point for the new center of the house. 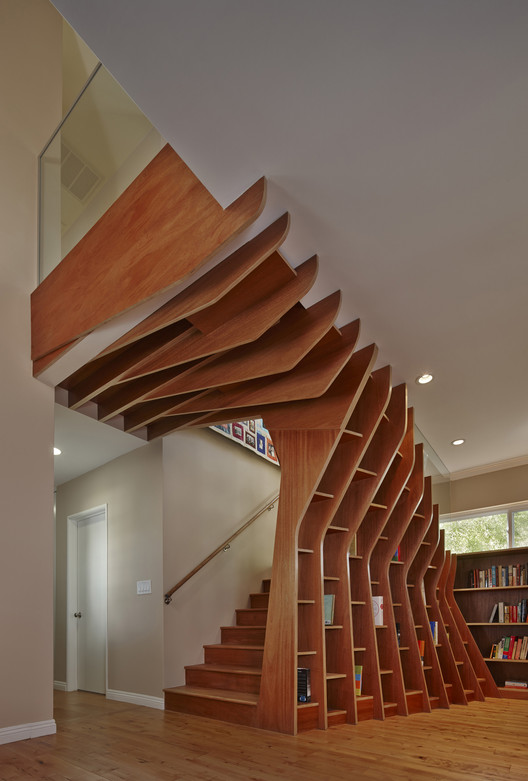