London-based Eric Parry Architects have unveiled a design proposal for a 73-storey office tower in the heart of London's financial district. Named '1 Undershaft', after its street address, the building will be one of the tallest in the city (standing at 294.6m) competing only with Piano's Shard (306m). Having been commissioned by Aroland Holdings (Singapore), the tower will contain 90,000sqm of internal space and feature "a new public square at its base" and "the capital's tallest free public viewing gallery at the top," according to Parry. It will stand in place of the existing 'Aviva Tower'.

"Most skyscrapers are used Monday to Friday but 1 Undershaft will be used seven days a week, with the public able to enjoy the new public square, viewing platform and restaurant every day," Parry continued. "It will be the jewel in the crown of the City of London and something we hope Londoners will be very proud of" while creating "more of the quality office space that is desperately needed in the capital and will reconnect the city’s tall building cluster with the public."

The planning application is expected to be submitted in early 2016. 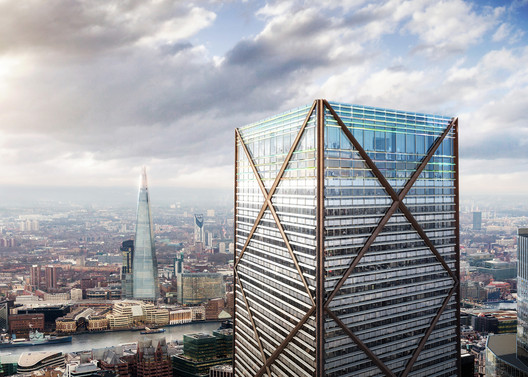