The six concept designs for the Tintagel Castle footbridge, the practices behind which were announced earlier this year, have now been revealed. With a shortlist featuring design consortiums led, among others, by WilkinsonEyre and Niall McLaughlin Architects, the proposals all respond to English Heritage's ambition for "a bridge that is of its place, [...] that, with its structural elegance and beauty, is in harmony with its extraordinary setting and landscape." 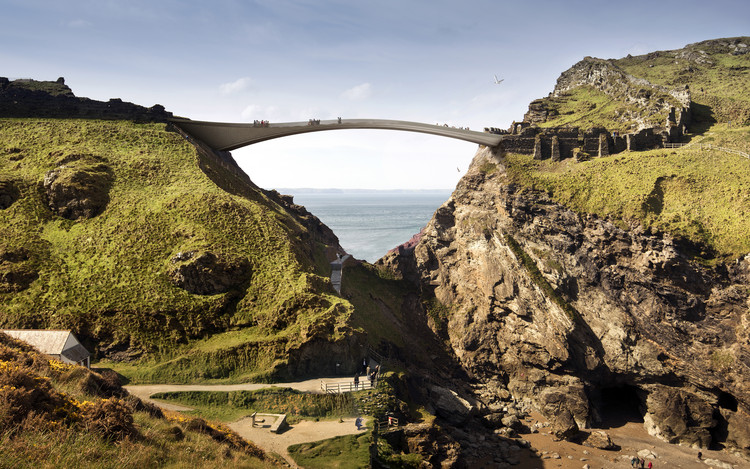 According to the competition organisers, "the new bridge will open up exhilarating views of Tintagel, the surrounding coastline, and the Atlantic seascape as it traces the path—now lost through collapse and erosion—of the original land-link between the mainland and the headland. The footbridge is expected to transform the visitor experience, improving understanding of, and access to, the site." They have also stated that "the winning team for this spectacular circa £4m project will be chosen by an eminent expert jury."

Between Land and Sea: The new connection re-establishes the historic walkway to the island. Our proposal is a design that replaces the former castle’s wall and historical isthmus virtually, with cables crowned by a linear element – the link. A bowed steel girder is stressed into a horizontal position by stainless steel plates that are anchored in the slopes of the ravine. This structural principle is an inversion of the forces that one would expect for a structure of this kind. Instead of compressed pillars, the bridge is stressed by slender stainless steel plates; pre-stressing means that the 65m-long walkway is both light and rigid. Magically, it uses the maximum potential that is within the structural elements themselves. The bridge is posed on the landward side and it is received by inclined pillars on the island side, providing a structural gap that recalls Tintagel’s symbolism and recreates the processional entrance to the sacred island.

The Bronze Blade: The rugged, wild beauty of this rich yet fragile site calls for a robust and delicate response – a bridge that is elegant, efficient, exhilarating and rooted in this spectacular place imbued with mystery. The Bronze Blade is a beam bridge – the oldest and simplest of bridge structures. Contemporary technology enables us to take it to new levels of breath-taking slenderness. The material choice is inspired by the historical significance of the site’s mineral resources; bronze handrails on site and Arthurian legend - the sword Excalibur. The bronze patination will enhance its appearance and durability – creating a visual link to the natural variations in the rock and lichens of the SSSI.  The exceptionally tall, slender, twin pillars supporting the bridge are inspired by the dramatic natural stone stack formations and mining chimneys found along the coast. They are striated in coloured, locally sourced, concretes that echo the dynamic seams of the surrounding geology.

The Tintagel Castle footbridge is based on a simple concept: to recreate the link that once existed and filled the current void. Instead of introducing a third element that spans from side to side, we propose two independent cantilevers that reach out and touch, almost, in the middle. Visually, the link highlights the void through the absence of material in the middle of the crossing.  The structure – 4.5m high where it springs from the rock face – tapers to a thickness of 170mm in the centre, with a clear joint between the mainland and island halves. The narrow gap between them represents the transition between the mainland and the island, here and there, the present and the past, the known and the unknown, reality and legend: all the things that make Tintagel so special and fascinating.

The construction of a bridge linking mainland and island offers a spectacular opportunity to solve the problem of access and to celebrate the landscape. Our proposal makes this link in way that is simple, durable and reinforces the place’s drama: a stone arch of Cornish granite springs across the chasm, seemingly tethering the island to the mainland. The arched form is made of stacked stones. Its segmented construction speaks of the compressive force that holds it aloft, and of the masonry castle walls and stone strata of the site. The apex of the arch is just 200mm deep. Its slenderness promotes economy, ease of construction and minimises the visual impact of the 70m span on this sensitive site. The upper surface of the arch forms a stone path bounded by a handrail of fine bronze balusters that recreates the lost land approach to the castle. It should feel both self-evident and astonishing.

High above the waves, the stone arch bridge evokes the solidity of the ancient pathway and isthmus that once existed in its place. The narrowing form of the granite structure echoes the “choke point”, the “Din Tagell”, which gave the island its name. Through the use of natural stone, the bridge takes its place within Tintagel’s historical layers. It grows seamlessly from the cliffs, fitting naturally within this dramatic landscape. The design team is jointly led by award-winning French engineering firm RFR and Jean-François Blassel. Blassel is a Paris-based architect whose designs are marked by simplicity of function and purity of structural principle, allowing structures to go beyond their primary function and become architectural complements to their surroundings. RFR and Blassel are supported by engineers HRW, a UK-based practice with a refined aesthetic approach to structural engineering. WSP Parsons Brinckerhoff will provide key expertise with environmental, geotechnical, and constructability issues.

WilkinsonEyre with Atelier One

WilkinsonEyre and Atelier One have designed a bridge, with uninterrupted space below, which emphasises a feeling of lightness and daring in a single span. Our modern, light touch intervention uses minimal foundations to recreate a connection over the narrow isthmus between the two parts of Tintagel Castle. It seeks not to compete with the historic remains, but rather serves to enhance the site’s dramatic nature while improving accessibility for all. Constructed from oak and stainless steel, the elements of the bridge are made up from a series of small components that are wheeled to site by hand and assembled in-situ. The bridge deck is straight and relatively narrow with stratified components, solid in the centre and perforate at the edges, accentuating its linearity. This layering is inspired by the striking abundance of slate at the site – the layering of the material representing a physical reminder of the passing of time.