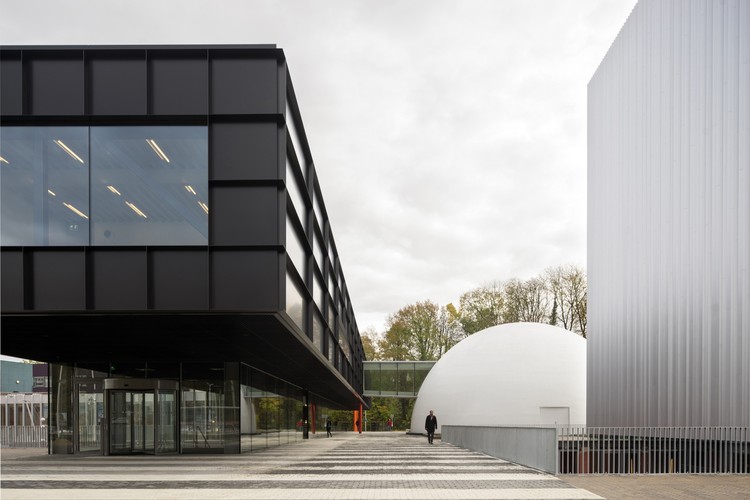 Text description provided by the architects. Museumplein Limburg, designed by Shift architecture urbanism, has been completed in Kerkrade, a town at the Dutch-German border. Two new public facilities, Cube and Columbus, have been added to the existing Discovery Centre Continium. With these additions, Kerkrade hosts the first design museum in the Netherlands, the first inverse planetarium in Europe, as well as a wide range of new public amenities. Shift architecture urbanism’s design is an urban ensemble defined by clearly recognizable volumes, all connected by an elaborate underground public space. Museumplein Limburg formalizes the entrance into Kerkrade for both train passengers and visitors arriving by car from the main access road.

Museumplein Limburg creates a trinity of complimentary museums: Continium, Cube and Columbus, combining technology, science and design in one museum district. Continium is a discovery centre for science and technology, while Cube is a design museum consisting of design expos and exploratory labs. Columbus houses a unique Earth Theatre shaped as an inverse planetarium and a 3D cinema conceived in partnership with National Geographic.

Together these elements become a "museum without boundaries", where visitors are regarded as participants rather than spectators. They discover the world and their place in it through interaction, participation and debate. Hence, in addition to museum galleries, Museumplein Limburg also offers shared facilities for conferences, events, workshops and education.

Above ground, the complex appears as a composition of primary solids: a cube, a sphere and a beam. Their pure geometry and omnidirectional orientation counteracts the amorphous and introvert character of the existing museum. Each building has a custom-made facade that emphasises its pure form and free-standing character. The new industrial materials connect to the original building, a former industry museum.

A large part of the 7500m2 new program is located underground. By extending the sunken square (the best feature of the original museum) underneath the new volumes, a continuous underground landscape is created that connects all the facilities of Museumplein Limburg, both old and new. In addition to the new museum square, this excavated landscape in red concrete hosts a central entrance hall, a restaurant, an enclosed patio and two tunnels connecting to Cube and Columbus.

Cube, the design museum, is truly a cube of 21x21x21 meters. A glass plinth creates the illusion of a volume floating above the red underground landscape. Together with the patio, this plinth allows for natural light and views into the temporary exhibition space located underneath. Cube is a vertical exhibition machine offering its programmers maximal freedom and flexibility. The various floors of the building create space for a changing set of design labs and exhibitions. Its top floor offers a multifunctional event space that can be partitioned in many different ways by means of a curved curtain system.

Cube’s structure consists of prefab concrete elements which are exposed on the inside. Their unfinished and neutral quality enables exhibition designers to appropriate the generic exhibition spaces according to any given theme. The only specifically shaped element in Cube's interior is the main staircase that links all gallery spaces of this vertical museum. It is made of identical straight flights which are variously rotated, creating the effect of a cascade falling down a 25 meters high void.

Cube is draped in a reflective curtain of coated steel that emphasizes the vertical character of the museum. The curtain effect is obtained by the random placement of vertical profiles of three varying folds that each reflect the light differently. The facade is cut open by two identical windows: one vertical that reveals the stacked exhibition floors, and one horizontal that provides the multifunctional space on the top floor with a panoramic view over the Limburg landscape.

Columbus is a spherical building, half above ground and half underground. The lower half accommodates the Earth Theatre, where a spectacular, 16-meter wide and 9 meters deep, hollow projection sphere can be viewed from two rings of glass balconies. This inverted planetarium offers visitors the experience of an astronaut looking back towards planet earth. In the upper half of the Columbus Sphere, underneath the dome, is the first National Geographic 3D cinema in Europe. It will show movies and documentaries produced by National Geographic.

Columbus’ cupola is made of two shells of shotcrete. The concrete was sprayed on a permanent geodesic scaffolding filled in with triangular plates of EPS isolation. The seamlessness of the shotcrete skin emphasizes the absolute form and its density guarantees sound insulation from the loud shows inside.

An important part of the communal functions in Museumplein Limburg is located in the 80 meter long rectangular volume, a beam hovering above the sunken entrance zone. With its recessed glass plinth, the beam serves as a grand canopy for the public walkway between train station and city centre that runs right through the museum district. Furthermore it marks the two entrances of Museumplein Limburg with two large cantilevers at both ends.

The bridge-like structure of the beam allows for maximum transparency between the public walkway on ground level and the underground entrance hall. Truss beams along both longitudinal walls are supported on just a few randomly placed columns in combination with functional elements such as the elevator shaft. This hybrid system escapes quick reading and makes the beam seem to float. The beam is clad in a black modular facade with protruding ribs creating a heaviness that strengthens the idea of a volume floating in space.

The new sunken museum square forms the heart of Museumplein Limburg. It extends seamlessly underneath the floating beam that hovers above the double height entrance hall. The linear entrance hall serves as the logistic backbone of the whole museum district. Visitors descent into this space via one of two wide staircases at both ends: one orientated towards the train station and the other towards the town's centre.

All stairs, walls and floors of the excavated  landscape are made of a uniform red concrete to emphasize the connective character of the space. The walls were poured in a formwork of rough wooden planks adding a tactile quality that contrasts with the abstract volumes above ground. The excavation out of red concrete, combined with the experience of descending  below ground, refer to the mining past of Kerkrade.

By situating a large portion of functions underground, the built footprint on the ground level was minimized, thus leaving space for public walkways to criss-cross the complex on this level.

The public walkways crossing through Museumplein Limburg firmly embed the museum district into the public space of Kerkrade. On the walkway to and from the train station, designed as a scaled up zebra crossing, pedestrians can see lively areas of Museumplein Limburg such as the entrance hall, the sunken square and the temporary exhibition hall underneath Cube. The visual dialogue between museum and station area adds to the experience of both the museum visitor and the train passenger.

A transversal walkway, punching through the entrance hall, connects the sunken museum square to the district’s bus terminal in the forecourt. This walkway provides train and bus passengers direct access to the museum's restaurant which can double as waiting room, transforming the museum square into a true extension of the public realm of Kerkrade.

The combination of public space and public transport with the museum district fits perfectly with the ambition of a "museum without boundaries": even passers-by become participants. 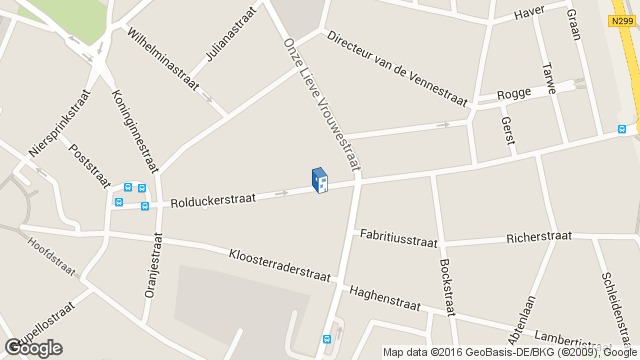 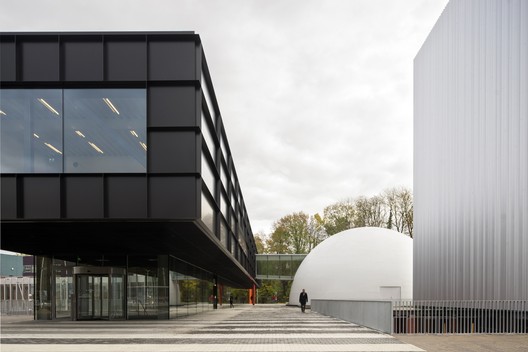