Save
These Glass Walls Slide Around Corners to Disappear From View

One of the most popular tropes of Modernist architecture was the goal of dissolving the external boundaries of the home, connecting residents to nature through the use of large glass walls in order to "bring the outside in." Nowhere was this project more thoroughly realized than in Mies van der Rohe's 1930 Villa Tugendhat, where an entire side of the glass-walled living space could, if the user wished, be dropped through the floor and the house become open to the elements. Elegant though it was (especially in 1930), Mies' solution didn't catch on, limited by the fact that it required an electric motor and a basement below in which to store the disappeared facade.

These days, while countless houses incorporate glass walls that fold, slide, or swing open, few offer the bravura of Mies' design, choosing to move the glass off to the side rather than making it disappear entirely. This year though, window and door manufacturer Vitrocsa may have turned a corner in the provision of vanishing glass walls with its "Turnable" system.

As shown in the video above, the "Turnable" system takes the concept of the regular sliding door a step further by enabling the panels to turn corners, ultimately allowing the panels to be hidden within the nearest solid wall - wherever it may be. The system was "developed to optimize space by completely removing panels from view," explains Vitrocsa's website. "Each panel can slide independently of each other and when they are moved out of the way can be completely hidden along a wall down the side of a building or stacked inside a pocket. Panels can freely slide around any number of corners allowing architects to design a massive opening with maximum views."

The tracks used by the system only heighten the sensation of the vanishing act: Vitrocsa's "Invisible" track system blends with the floor covering, leaving just a 10 millimeter groove marking the line separating what was once the inside and outside of the building. 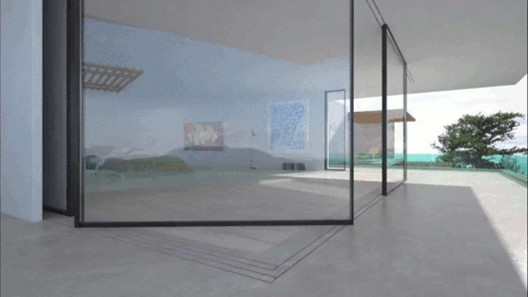