Text description provided by the architects. The project is a convertion of an existing warehouse located in the Brasília´s industrial sector. The area is suffering a rapid transformation with the creation of residential buildings and commercial buildings side by side with poorly built industrial warehouses. The client wanted the building to work as a furniture shop, an art gallery and a space for cooking classes. The budget was very tight and therefore we proposed to refurbish the existing building and “wrap it” with a new layer of construction, keeping the existing structure, roof and most of the existing walls. The idea was to make the new layer work as an element of transformation.

All the scaffolding that was used during construction was kept and are now used to display furniture inside the building. A new layer of polished concrete was applied to the floor. The new building “skin”, built with two types of concrete block, refers to its transformation: Instead of working purely as a structural material it was left exposed and used as a finishing material.

The intervention defines a new entrance, where the existing gate was transformed into a sliding screen for temporary artistic interventions. At this point we have used two types of concrete blocks, the partitions block and the structural block. Concrete was poured in the structural blocks on the edge and some of the partitions block, creating a suspended wall that reinforces its “decorative” character. The central element of the internal space is the new stairs, which oganizes different functions and also helps to structurally stabilize the existing mezzanine. Its materiality is undefined on purpuse, na it serves as a “blank screen” for artistic interventions. 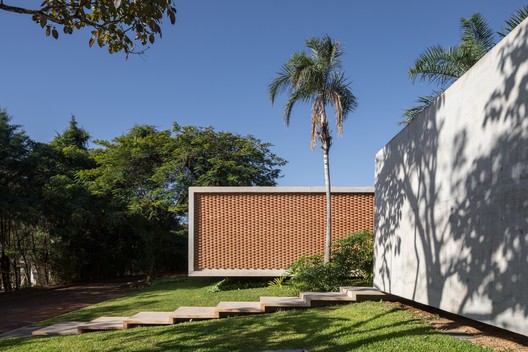