Steven Holl Architects (SHA) is preparing to break ground on a project that is nearly eight years in the making. The ambitious "Copenhagen Gate" development will break ground next year, as Fast Company reports, after being initially held back in 2008. It will feature two asymmetrical towers - Gate L and Gate M - connected by a (terrifying) pedestrian skybridge suspended 213 feet above the harbor.

"The Langelinie site, a berth for ocean ships for decades, is expressed in the Langelinie tower, Gate L, with geometry taken from the site’s shape. A prow-like public deck thrusts out to the sea horizon. Gate L is expected to be furnished with cafes and restaurants. The Marmormolen tower, Gate M, connects back to the City," says the architects.

"Due to the site geometry, these bridges meet at an angle, joining like a handshake over the harbor. The soffits below the bridges and under the cantilevers pick up the bright colors of the harbor; container orange on the undersides of the Langelinie, bright yellow on the undersides of the Marmormolen. At night the uplights washing the colored aluminum reflect like paintings in the water."

Correction: Steven Holl Architects says that the current bridge scheme does not include a bike lane, as this article originally stated. Initially city officials asked for the sky-bridge to be open to bicyclists, however since it has been decided that the design will "no longer to be used for cyclists and alternative solutions are being pursued." 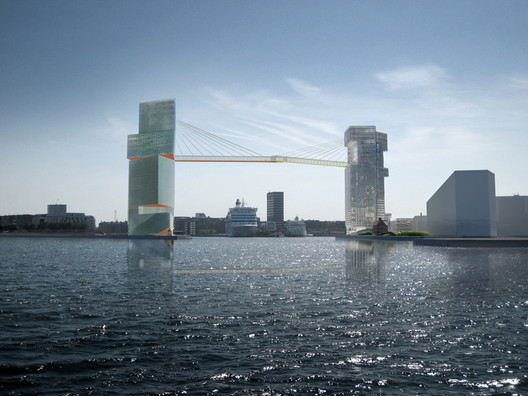