The significance of people in architectural rendering is nothing new – the added realism, and addition of narrative elements can make or break whether a render successfully sells its project. With sites like Skalgubbar, architects and architecture students have easier access than ever before to “Render People”: PNG cut-outs of people, ready to be photoshopped into buildings.

In the early years of free, online render-people databases, there was a stark homogeneity to the people represented. As the people providing the crowdsourced images were from predominantly Caucasian, Scandinavian countries, there was a surge of such people appearing in renders in projects across the world. In wake of this, other groups have worked to produce workable databases of diverse, culturally representative render people, giving architects and architecture students the freedom to accurately depict their work in its intended context.

We’ve rounded up 5 different sites that offer free render people of a wide range of ethnicities. See them all after the break.

One of the first sites to diversify the available render people on the internet, Escalatina was created by a group of “young latinos” inspired by Skalgubbar. Their mission was to create a database for Latin-American architects to populate their renders with local people. The website offers high-resolution PNG cutouts of its subjects, with tags in Spanish to categorize them, similar to Skalgubbar.

A response to both Escalatina and Skalgubbar, Nonscandinavia is an initiative by a student group at the Graduate School of Architecture, Planning, and Preservation at Columbia University. The project provides a large, free database of render people of various ethnicities, intended to “combat the ubiquitous creep of Swedish Hipsters into project renderings outside of Sweden," Nonscandinavia told us. "We additionally aim to use the platform of a free database to engage in more critical dialogue about the nature of representation in architecture.”

Similar to the above, Cut Out Life offers a relatively small, but high quality selection of Render People from around the world, with a variety of niches represented. The website accepts submissions from contributors around the world, keeping track of the percentage of the world’s countries that it has represented, with the current standing at 10%.

Created by architecture collective Micrópolis, Skalgubbrasil is "based on the Swedish site Skalgubbar, but in a Brazilian context." The site features cutouts of people from all regions of the country in addition to several cutouts of interesting objects and animals, adding more character to their selection.

Offering not only people, but cutouts of vegetation, vehicles, objects and more, Mr. Cutout has a rich selection, both in number and diversity, of Render People. The indexed website makes it easy to search with specific criteria, though ethnicity is not one of the indexed factors. Unlike the previous websites, Mr. Cutout requires sign-up, and also offers a subscription service which removes a 2.5mb/day limit on downloads, as well as giving access to “premium” cutouts. 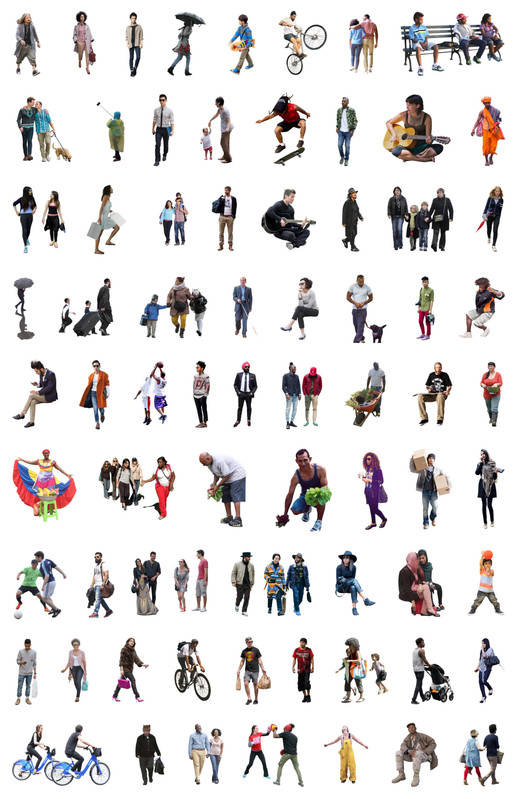