COBE and Lundén Architecture, the Danish-Finnish collaboration that has previously worked together on Tampere's Transport Hub, has revealed a plan to revitalize the Töölönlahti bay area in central Helsinki. Completed for the Finnish creative marketing agency N2, the proposal is a vision of what the area could become after a century of broken promises to clean up the polluted and underutilized area of the city. On their website, N2 estimates that the project would require an investment of €120 million, and if taken up by the government could be completed in time for the 100th anniversary of Finland's independence in 2017. 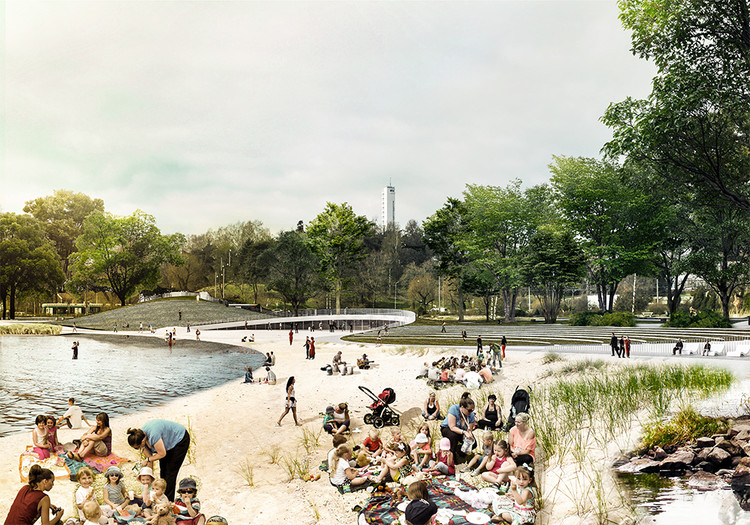 Described by founder and creative director of COBE Dan Stubbergaard as "a forgotten pearl in the heart of Helsinki," Töölönlahti bay is an important piece of Helsinki's natural infrastructure. During the industrial expansion of Helsinki in the late 19th century, the bay became a dumping ground for the factories that proliferated in the city center. In the 20th century, the bay was recognized for its potential value in the city, with development plans proposed by both Alvar Aalto and Eliel Saarinen. However, neither of these proposals were carried out and to this day Töölönlahti suffers from pollution and eutrophication; in its current state, it is predicted that the bay will gradually become swamp-like and eventually dry out completely.

The design by COBE and Lundén Architecture calls for the cleaning of the bay alongside new pedestrian and bicycle routes and an "eventful promenade" along the water's edge, connecting the surrounding neighborhoods with the bay and provide a valuable green space in the heart of the city.

"We want to give Töölönlahti back to the people. Through a comprehensive and ambitious water purification plan, the currently polluted bay will become Helsinki’s main central urban space. A place where people from all over the city will swim in the water, sunbathe in the summer sun and drink evening coffee along the promenade. Like the purification of Copenhagen’s central harbor area at the end of the nineties, this could be a catalyst that begins a major revitalization of Helsinki," said Stubbergaard.

"The new vision is as much about enhancing the existing qualities and conditions as introducing new programs and public spaces in order to create a new citizens park for all of Helsinki," added Director of Lundén Architecture Eero Lundén.