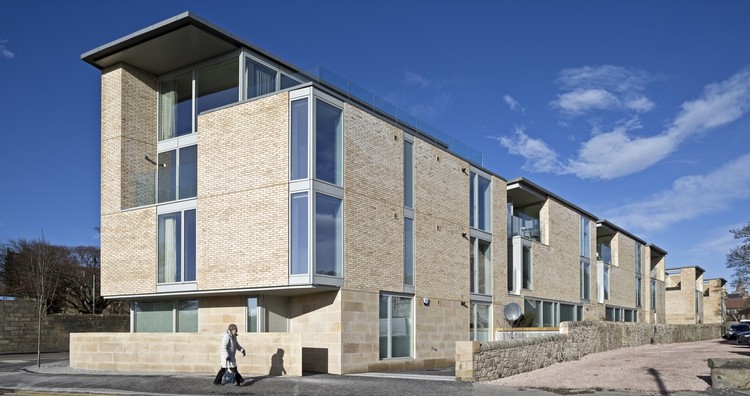 Text description provided by the architects. West Burn Lane is a private development of 14 housing units in the centre of St Andrews. It occupies a narrow plot, delineated by the medieval stone rigg walls that extend perpendicular to the main streets and consists of 6 town houses and 8 flats organised around a series of private and public court yards. We responded to the the following characteristics of the surrounding streetscape in the development of the project:

-The linear pattern of Rigg plots that run perpendicular to the main streets
-The distribution of small free standing buildings in amongst the gardens of the Rigg plots with clear space between, through which you can see daylight and vegetation.
-The rhythm of recesses and doorways along the narrow lanes that reflect the slow process of development of the -Rigg plots over centuries.
-The palette of natural materials that exists in the town

The site is located within the St Andrews conservation area and the palette of materials was chosen with both the immediate context and the longevity of the scheme in mind. Fife District Council were very concerned about the use of 'contemporary' materials like brick within a Medieval, Georgian and Victorian context so we produced a number of sample panels prior to construction, testing different stone brick and mortar combinations, ultimately selecting Petersen D71 bricks for the upper storeys. Tooled sandstone has been used at the base in reference to the plot delineation of the tall rigg walls and the tones of the Petersen bricks above this datum complement that of the sandstone.

West Burn Lane is located in a conservation area in the historic centre of St Andrews and consists of 6no four bedroom houses and 8no two & three bedroom apartments. The buildings are organised as discrete volumes which address a series of public and private urban courtyards. They mediate between the tight-knit medieval urban grain and the scale of the surrounding university buildings and church hall, increasing in scale towards the south.

Taking cues from the historic rigg pattern of St Andrews, the buildings are tiered as the move down the lane; clear pends are maintained between which give sight to the sky and vegetation beyond and pick up the rhythm of doorways and thresholds in the historic stone walls of the Riggs. By alternating between two main house types within the narrow confines of the lane, the broad-fronted but narrow-depth and the narrow-fronted but deep plan, we were able to provide secluded private garden spaces between dwellings that have aspect to the south-east.

At the southern end of the site where the lane opens up there is a larger scale building in keeping with the grander and more spacious context, where the apartments take advantage of the panoramic views to the south. Located between these elements are two maisonette blocks. These are set back to create a new piece of public realm around a mature tree, a courtyard offering amenity space and off-street parking but with enough room to the rear to allow for small courtyard gardens.

There are seven house types being proposed within these three broad typologies. From north to south these are:

Town House Type 1: Three storey, four-bedroom, narrow street-fronted and deep plan townhouse with a dedicated single-car garage and single car port at grade, a rear garden to the east and a roof terrace on the third floor.

Town House Type 2: Three storey, four-bedroom, wide street-fronted and narrow depth townhouse with a dedicated 2-car garage at grade and a rear garden to the east.

Apartments: Four storey apartment building consisting of a unit per storey. At Level 0 there is a two-bed apartment with it’s own separate entrance, accessed from Queen’s Terrace, via a small private garden facing south. Apartments on Level 1, 2 and 3 are accessed via a communal stair entered via West Burn Lane. Level 1 and Level 2 both have three-bedroom apartments whilst the third floor is for a two-bedroom penthouse apartment with large outdoor terrace facing south.

A total number of 14 units was achieved on-site, which exceeded the requirements set in the challenging brief from the client. SHA were selected through an invited competition organised by developer Eastacre Investments. 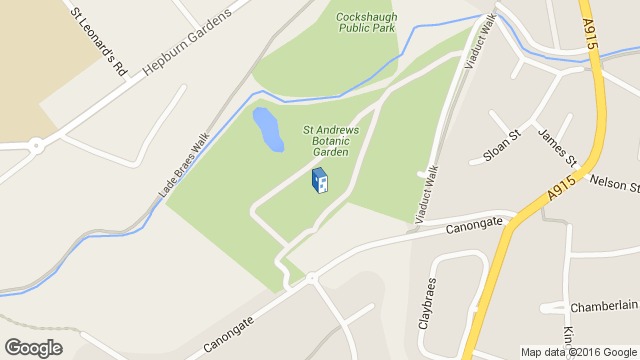 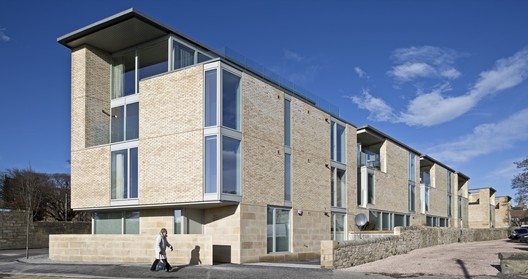