Text description provided by the architects. The office building, completed in 1964, was designed by W.M. Dudok. The eleven story high building

includes 12.000m2 office space, meeting rooms, a canteen and an underground bicycle parking. The façades have an homogenous appearance with an exception at the east facade, which expresses the front of the building.

The approach was to respect the existing facade and renovate accordingly. The student apartments were easily fitted in the existing structure of columns and concrete floors. Only in the north and south façade extra windows were necessary to allow daylight in the rooms behind. The function of housing does require a better acoustic insulation from the adjacent highway. Therefore a double skin is developed at the west façade in the form of a loggia with a yellow frame between the two skins. On the east façade, facing the quiet Krelis Louwenstraat, no second skin is necessary, and the yellow frame now forms a internal windowsill. The characteristic canopy on the eleventh floor is emphasized with a graphic yellow print that from street level appears like an autumn foliage.

Now 285 students moved into the affordable social housing; 80 in two bedroom apartments, 187 in private studios and 18 students have a ‘penthouse’ on the top floor. Bicycle parking and laundry are located in the basement. The ground floor is being developed by Hostelle, a hostel concept for women. 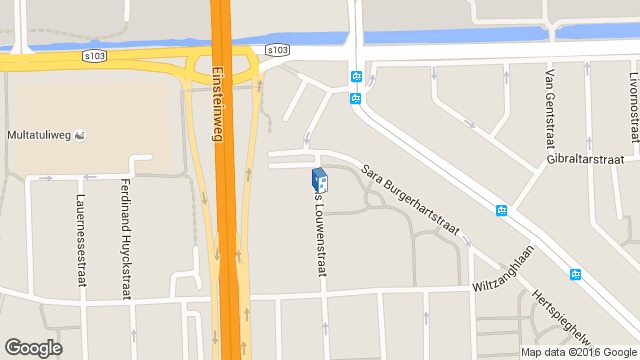