In recent decades, China has undergone the most dramatic urban migration in the history of the world, so you might be forgiven for thinking all that is required from urban planners is to "build it and they will come," so to speak. However, as the Western media often reports with much schadenfreude, China's unprecedented urban explosion has not come without a few missteps, and many new cities are widely claimed to be "ghost cities," empty of residents even as more gigantic apartment blocks are being built. Such stories are usually accompanied by anecdotes of empty public spaces and a rough count of the number of homes left in the dark at night, but little further empirical data. So exactly how underpopulated does a city have to be to be a "ghost city," and just how rife are such places in China?

As reported by MIT Technology Review, one Chinese web company has started looking for answers to just such questions. Baidu, effectively a Chinese version of Google, has used their "Big Data Lab" to investigate the commuting patterns of their 700 million users, establishing exactly which cities are dramatically underpopulated.

Led by Guanghua Chi, Baidu's Big Data Lab built on an existing definition of urban areas from the Chinese Ministry of Housing and Urban-Rural Development, which states that cities should be capable of supporting 10,000 residents per square kilometer. According to Guanghua, any city with a permanent population at half this density might reasonably be labeled as a ghost city. The Baidu team was also able to factor in seasonal influences, filtering out cities that might appear empty most of the year, but are in fact simply major tourist traps.

As a result of their study, Baidu has identified over 50 cities throughout China that have a significant lack of permanent residents, hoping to influence better urban decisions from government officials and developers in future. To find out more about the study, check out MIT Technology Review here, or see Baidu's interactive map here. Or, keep scrolling for more images of the afflicted areas.

Image of Chenggong housing via Shutterstock.com 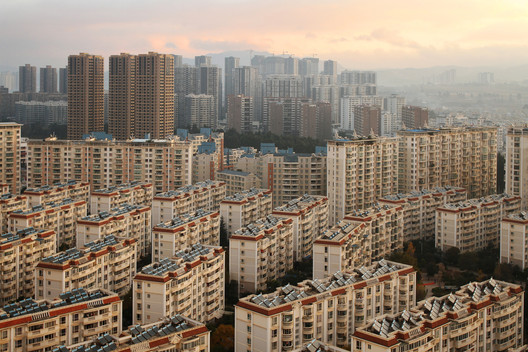