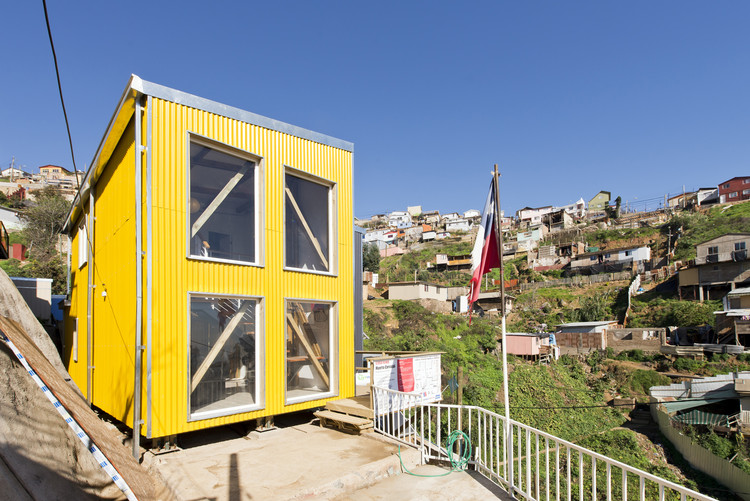 Text description provided by the architects. After the fire of Valparaiso on April 12, 2014, students and faculty of the Department of Architecture at the Technical University Federico Santa Maria, find the opportunity to apply Phoenix House project in a real context. The project had been developed after the participation of the team in Solar Decathlon Europe 2014.

FENIX House began as a proposal for emergency housing from modules, where the first two modules established the basis for the construction of a final, permanent quality housing. One of the requirements was to design with climate in mind, taking into account factors of latitude, topography and orientation, aiming to meet the standards to be included in the new technical regulations MINVU (NTM 11 part 1 and 2) for different regions of the country; generally self-built housing does not meet even the existing thermal regulations. In the process, participatory design practices were also included, for which workshops with victims of the disaster were made. The inhabitants could propose the distribution of spaces for housing through prefabricated modules to scale, properly identified. Later, the architects interpreted the unique needs of each family which were considered in the final design.

In this context the team selected the Carvajal Huerta family whose missing house was located in the ravine between the Las Cañas and El Litre hills (Valparaiso) to perform the reconstruction of the new housing. With the family, the overall distribution of the enclosures and housing program was decided. During construction, regular meetings were held to decide together finishes  and other details. The construction was carried out with builders from the area and contributions from companies DECEUNINK, SODIMAC, VENERGÍA, VOLCÁN and CINTAC.

The project was developed as an experimental process, which was taken as a challenge for the family and the UTFSM team, as this housing system was previously built only twice as a prototype.

The main structure is visible and was prefabricated in wood, this structure is enveloped by the floor, ceiling and walls with different local materials from our industry. The architecture of the house considered typical elements of the city, like the north gallery and corrugated metal siding. The property has an area of 92.5 m2, 40% more compared to other subsidized housing. It is a spacious 3-bedroom house where natural lighting is maximized given the conditions of the terrain.

The opaque housing envelope was calculated to efficiently adapt to the specific climate zone of the latitude of Valparaiso, the thermal transmittance value is 0.45 W / m2 ° C, which is 6.6 times less than id currently required by thermal regulations. Having a thermal envelope adequate to its latitude, that is, well insulated walls, is an important contribution for energy conservation and indoor climate, which means a better habitability for users and a demand for heating reduced to almost 0. In this case, as assessed by MINVU energy ratings, savings would reach 80% of what is required compared to a home that meets the current thermal regulations.

The house also has four photovoltaic panels for electricity generation and a solar thermal system for hot water (mixed solar / gas). Which means that the house will produce much of the energy that the family will consume. 7.8 m2 of photovoltaic panels allow generating almost 100% of the energy demand of the house, generating 1097 kWh / year, of which 50% goes directly to family consumption and the other is injected into the network. Meanwhile, the solar thermal system will supply 51% of the total consumption of ACS, equivalent to 1,191 kWh.

Currently, the performance and livability of the house are being studied and measured under the FIC-R 2015 Valparaiso Project, one of the purposes is to demonstrate that the good practices of sustainable design and use of URE may also be applied to social housing without necessarily increasing significantly their cost.

The ultimate goal of this project is to build better quality subsidized housing, maximizing resources and donations and collaborative work with the public and private sector (Government-Industry-Community) and academia, promoting technological innovation, experimentation and creativity in the housing industry by contributing in concrete form from academia to the community.