A conceptual design by Studio Gang was unveiled today as the preferred expansion to the American Museum of Natural History (AMNH) in New York. The proposed building, named the Richard Gilder Center for Science, Education, and Innovation, aims to host an array of public exhibition space as well as become a premier "active scientific and educational institution" that enhances connections with the existing Museum and encourages exploration amongst its users.

“We uncovered a way to vastly improve visitor circulation and Museum functionality, while tapping into the desire for exploration and discovery that are emblematic of science and also part of being human,” said Jeanne Gang, founder of Studio Gang. “Upon entering the space, natural daylight from above and sightlines to various activities inside invite movement through the Central Exhibition Hall on a journey towards deeper understanding. The architectural design grew out of the Museum’s mission.”

The building, planned for a site on the Columbus Avenue side of the Museum at 79th Street, was inspired by unrealized aspects of the Museum's original 1872 master plan. In its design, visitors first encounter the Central Exhibition Hall - the new "geographic center" of the museum. With a "cavelike" interior, as the New York Times describes, the hall forms a seven-story atrium sculpted by undulating concrete walls and "connective bridges" (much-like the "geological canyons" and "glacial forms" found in nature) that give foresight into the Museum.

"Recessed cavities" within the walls provide space for galleries, which will be designed by Ralph Appelbaum Associates, as well as areas for laboratories, imaging facilities, visualization theaters, classrooms and collection space. Additional programs will include the Invisible Worlds Theater, the Museum Library, an insect hall, and additional "exhibition niches."

"The visual language of the Central Exhibition Hall informed the conceptual design of the façade, which imagines the interior walls emerging and wrapping around the exterior," says the AMNH. "The exterior will be clad in glass and stone, which will be selected in the upcoming design phase with consideration of materials used in the existing complex. The conceptual design maintains the current heights of the Museum building complex on its western side, placing the Columbus Avenue façade at the same height as the buildings on either side of the new entrance. On the south side, the façade is aligned with the adjacent building and steps back to meet the bordering building to the north. The conceptual design is consistent with the axial intention of the original 1872 master plan while recognizing the park setting in which the Museum is located." 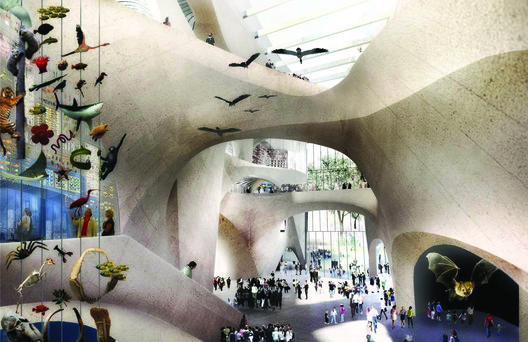