Architecture and art have had a long and complicated relationship. Many people consider architecture to be “the mother art,” while others believe the burdens of program and pragmatism prohibit architecture from the realm of pure artistry. But what happens when architecture is displayed alongside art? Next Wednesday, November 11th, Crystal Bridges Museum of American Art in Bentonville, Arkansas is primed to open Frank Lloyd Wright’s Usonian-era Bachman-Wilson house to the public. It is the first Wright home to be relocated to an art museum property, accompanying the museum's Moshe Safdie-designed building within a short walk of artworks by Norman Rockwell, Donald Judd and Andy Warhol. These unique juxtapositions open up new conversations about the goals of preserving buildings as well as chances to contemplate architecture’s place within art history. 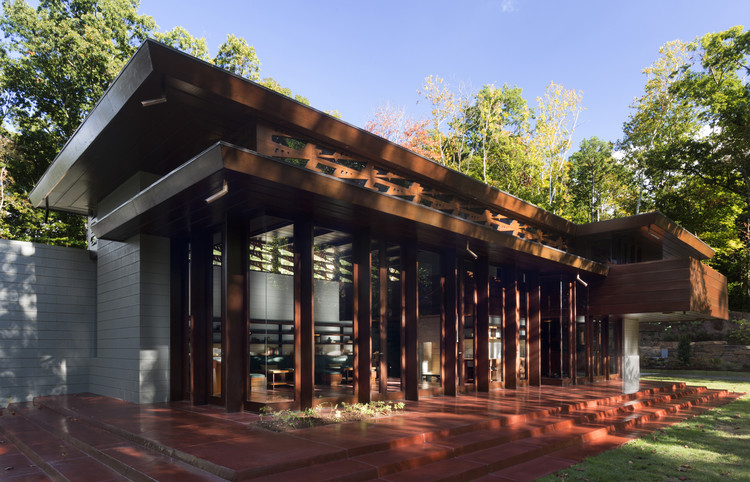 Designed in 1954 for the sister of a Taliesin fellow and her husband, Abraham and Gloria Wilson (nee Bachman)'s residence was originally constructed along the Millstone River in New Jersey. Built from Philippine mahogany, masonry block and Cherokee Red concrete floors, the house featured hand-cut clerestory panels and a second-story, uncommon in Wright’s Usonian designs. The structure was sited at the furthest reaches of the plot, offering its residents privacy and 180 degree views of nature from its glass-walled living room. For the next 30 years as development in the area continued, the river level became volatile, turning the house’s location on the site from a feature into a liability. Soon, the house began to show flood damage. In 1988, the house was purchased by architects Lawrence and Sharon Tarantino with the vision of restoring the home to its former glory, stripping materials to their original finishes and filling the home with Wright-designed furniture. But threats from the flooding river grew increasingly frequent, prompting the Tarantinos to decide that relocating the building was the best option for its preservation. Following a multi-year search for a suitable location, Crystal Bridges Museum of American Art acquired the house in 2013.

Disassembled piece by piece and transported over 1,200 miles to northwest Arkansas, the house’s new home was selected to evoke the qualities of the original site while making the house as accessible as possible to museum-goers. Though the original floor plane sat low on the site, making it prone to flooding, the house now sits upon a bluff, free from danger. One could argue that the change in topography would change the experience of being inside the home, but according to former owner Sharon Tarantino, the house may be better sited now to appreciate the surrounding nature than in its original location. The building’s orientation was shifted slightly, redirecting the glass-walled facade from southeast to southwest to relate to the waters of Crystal Spring below. Wright’s decision to wall off the north facade and open up the south-facing facade enhances the drama of the site’s topography and creates a flat vertical surface for the shadows from the intricate clerestory panels to creep up as the afternoon sun moves through the sky.

The house has not been staged to reflect any particular era of its 60-year existence, but rather attempts to tell the story of its occupants and embody the essence of the original design. According to Scott Eccelston, Director of Operations at the museum, the house was constructed to best display Wright’s intentions: “We wanted to understand the design principles that helped generate the architecture and its uses.” Taliesin origami chair reproductions and custom designed coffee tables (that can be stacked to extend the dining table) added by the Tarantinos pair seamlessly with the built-in sofa and bookshelves. An addition under the cantilever of the carport has been removed. Modern appliances reside in the kitchen. Dylan Turk, a member of the curatorial team concentrating on architecture at the museum, explains that the way the house is staged “can and will change. There are possibilities for exhibits to keep the dialogue going and to eventually connect this back into other things that we are doing around architecture.”

“This is just its first phase, I would say,” he adds coyly.

As with most architectural preservation projects, new infrastructural systems have been installed to ensure the longevity of the house’s condition. Sleek new diffusers have been installed under the windows to help cure condensation issues, and a basement has been added to house HVAC needs. This has all been done with a deft touch and the changes remain invisible to all but the most observant viewer, but while the new constructions uphold the illusion effectively, other conservation practices make visiting the house slightly more difficult. Just 10 people are allowed into the home at any one time, and the upper floor (featuring views down to the living area and out through the clerestory) is off-limits for accessibility reasons and to ensure the space is not damaged. The house can function like a real home - everything inside still works, and Turk even admits to using the sink to wash dishes - yet to avoid installing fire emitters and sprinkler systems throughout the house, Crystal Bridges was forced to promise that no one would ever spend the night. This elimination of a house’s original function raises the question: is it possible to truly understand how someone could live in a house that can no longer be lived in?

The answer to that question feels like a yes. When asked about the main differences between viewing a painting or sculpture versus the house, Turk explains that architecture retains a quality that most art tries to avoid: familiarity. “I think that people can really connect to architecture and relate to it in a different way because it’s subconsciously interacting with you - there is a familiarity to it. You’re in something.” But simply surrounding the viewer does not earn a piece the label of architecture. A nearby James Turrell skyspace is considered a sculpture by the museum staff, while a similarly sized entry pavilion for the Bachman-Wilson House is considered architecture. Comparing these works opens up a conversation about where the line dividing art and architecture begins and ends, and how blurred that line can be. It’s a question Turk says is always on his mind, and one the museum hopes to “have larger conversations about in the future with projects that we do.” One of the ways the Wright house maintains its architectural status is through the easily identifiable elements that lend the home its approachability. The residence is composed as much of walls, counters and furniture as it is pattern, rhythm and light. People don’t need to be convinced of the home’s value because they more readily understand its purpose.

Yet high design remains something that many homeowners view as unattainable, even in a region of the country that is home to historically-renowned architects such as Fay Jones and Edward Durell Stone. Northwest Arkansas is predicted to be the 3rd fastest growing metro area in the country through 2020, and, as in much of the country, a large majority of residential construction in the area tends to favor size over quality. Turk admits that the house’s presence can be viewed as a suggestion to the public: “There are cues here that people should take: do we really need to have a 3500 square foot house or could we have a smaller footprint? This house will be able to explain to people that although you may have a smaller home, you may have a better life, because it allows you to connect with your environment in a way that people really want, but don’t know that they do.” Crystal Bridges Chief Engagement Officer Niki Stewart sees the house as an embodiment of Wright’s belief that people should streamline their lives by removing excess. Stewart explains, “The carport of the home says it all: if Wright were to add walls, it would be a garage and somehow become cluttered with things we don't really need. By creating a carport instead, he removes the chances of clutter accumulating in that space. In our modern world, this is an idea that's re-emerging with the small house movement - less is more, in life as in architecture.” If there is a time for a civic intervention on architecture in the region, it is now. And with several successful architecture firms in the area, such as Marlon Blackwell Architects, Modus Studio and deMX architecture, designing with affordability in mind, the house has the ability to convince people that “they too can live in a great piece of architecture if they want to.”

Crystal Bridges believes that art should be treated as a learning tool that is accessible to all. Now, with the addition of a work by the AIA’s "greatest American architect of all time," architecture can be showcased as a vital component of the timeline of American art.

Correction update: This article originally stated that the Bachman-Wilson house was the first Frank Lloyd Wright building to be relocated to a museum property. This was incorrect; in 1964 Wright's Pope-Leighey House was relocated to Woodlawn, which has operated as a historic house museum since 1949 (thanks to commenter grb for the tip). The article has been changed to specify that the Bachman-Wilson House is the first Wright home relocated to an art museum property.