Light is the universal source of all human potential to act (even to eat) and achieve. After millennia of human reliance on flames, Thomas Edison demonstrated the first commercially viable electric lamp in 1887. He switched on the modern era of relentlessly radiant cities, beginning with the Eiffel Tower in 1889 and underpinning the utopian mid-20th-century visions of Le Corbusier, Mies van der Rohe with Richard Kelly, and other visionary urbanists on both sides of the Atlantic.

Flying over high-rise New York during the pre-1960 years of electricity-enabled commercial air travel, American atomic physicist Nick Holonyak, Jr. (then a young researcher for General Electric, the company Edison founded) told himself there must be a smarter way to light cities. He knew that incandescent lamps convert only 10% of their electrical supply to light and the other 90% is lost to heat.

"RED HOT" was the coverline of science journal IEEE Spectrum when it featured Holonyak’s 1962 demonstration of the first visible red laser beam, which he generated from a pill-like semiconductor that was later labelled ‘the magic one’. This white disc, incorporating tiny cleaved mirrors, was the world’s first effective light-emitting diode (LED). It was made from its inventor’s own alloy of gallium arsenide phosphide (abbreviated to GaAsP in science’s periodic table of elements).

Holonyak’s momentous creation of that first viable LED was followed by LEDs in yellow and green, before Japanese inventor Shuji Nakamura, working for Nichia Corporation, demonstrated the first high-intensity blue LED in 1994, and then proved that coating blue LEDs with a yellowish (YAG) phosphor could generate high-intensity white light. Nakamura and collaborators Isamu Akasaki and Hiroshi Amano won the Nobel Prize for Physics in 2014.

Holonyak’s invention triggered the late 20th century’s vast revolution in electronic equipment, including today’s networked tablets and mobile phones. Nakamura not only enabled the current Blu-Ray DVD units and many ambitious RGB light and video spectacles in public venues, but also, crucially, created the LED non-colours (warm or cool white) that are essential for everyday lighting of contemporary spaces.

Holonyak and Nakamura consecutively pioneered today’s global revolution in solid state lighting (SSL), where, in Holonyak’s words, "the current itself is the light." After many years of refinement by major lighting manufacturers, LED lamps now use up to 75% less energy and last up to 25 times longer than incandescent or halogen bulbs, and up to three times longer than compact fluorescent light (CFL) tubes. Further efficiencies are possible when LED lights are powered with energy from renewable sources, including solar, wind and biofuel systems.

The new frontier for eco-efficient light in cities is the smart grid, which allows power to be shared among users on local neighborhood networks – a strategy likely to minimize wastage of electricity over the longer distances necessary with metropolitan systems.

Another important goal is to reduce light pollution of the skies above cities. Is it a vain hope that parents might once again point their children to see stars from urban locations? The most promising strategy is to install new networks of dimmable LED streetlights and new fixtures designed to block uplighting and spread beams downwards.

Thanks to Holonyak and his followers over the past half-century, we now revel in a third age of light: the digitally networked LED era of cool-to-touch electroluminescence. Their advances in atom-related physics sparked unprecedented creative potentials for the internet-era "City of Bits" heralded in 1995 by MIT architecture scholar, William J. Mitchell. Professor Mitchell also propagated the term "smart cities," which inspired our choices here of "smart light" projects. 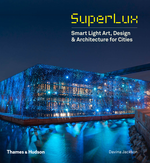 PublicationsLightingLEDLight
Cite: Davina Jackson. "How the Science of Light Will Affect the Future of Architecture" 31 Oct 2015. ArchDaily. Accessed . <https://www.archdaily.com/776340/how-the-science-of-light-will-affect-the-future-of-architecture> ISSN 0719-8884
Save