Save
Student Housing and Nursery for Paris / VIB Architecture 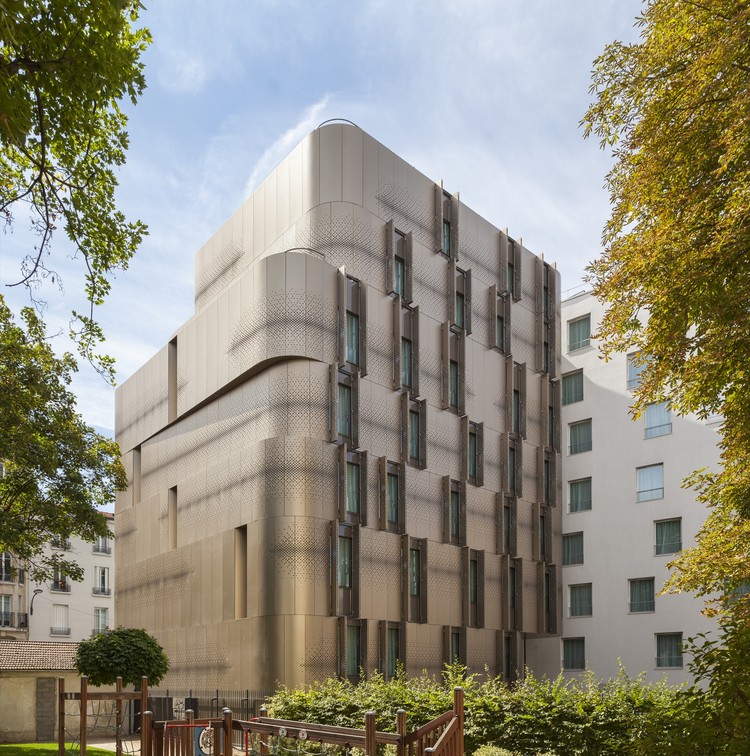 Text description provided by the architects. On 117 rue de Ménilmontant in one of Paris’s busy northern neighborhoods, VIB Architecture took possession of a long and narrow plot to construct and rehabilitate several buildings for a mixed-use program: a residence with 89 student housing and a nursery for 66 children.

The faubourg of Belleville, located on one of the two main hills of Paris, is characterized by its heterogeneous architecture, with buildings from various times, with different heights and various programs. One of them is the “Pavillon du Carré Baudouin” built in the XVIIIth century as a place of pleasure and leisure, which is now an exhibition space attached to a small park open to the public. There are also an old orphanage, some Haussman buildings or small houses and workshops. The neighborhood is also known for its passages and small alleys that irrigate the urban fabric in depth.

Vib’s project, built on this rich context, organizes several buildings new or rehabilitated from the street to the heart of the faubourg. They individually answer to the specific context and participate to the multifaceted picture of the “Belleville Village”.

The project takes advantage of Paris’s specific urban rules: apartments are located on the street and rise to the 7th floor, while the childcare center is located around a quiet and sunny courtyard at the back, among smaller scale additions and small roofs. The existing building links the two programs together.

The front building is itself fragmented and split in two. The first part stands out along the park with rounded corners and aluminum skin while the second building picks up the geometrical typology of the nearby buildings and declines towards the middle of the plot and the existing building. The porch created by the two volumes initiates the main composition axis and leads to the childcare center and its inner garden

The student building’s ground plan is designed around several main flux like the path to the nursery and the vehicle and pedestrian access to the next door’s yard. It also houses the lobby for the apartments, the student community room and the bike-park. The glazed staircase allows an inter-stage use and facilitates exchanges between students, without imposing the use of the elevator. The wing of the building on the park side, with its aluminum skin, hosts 49 students on 7 floors. The other part of the building hosts 32 students on 7 floors and offers on the 5th floor a common rooftop with a panoramic view of Paris. All rooms are suitable for disabled people.

The nursery occupies the entire ground floor with service functions like the cloakroom for staff, kitchens, or push-chair storages. These rooms are directly linked to the children reception area via a functional circulation. On the first floor, most of the space is occupied by student duplexes.

After entering the entry porch, parents, kids and staff go through a common garden designed like a transition space between the street and the spaces dedicated to early childhood. The kid’s motor room is set in the transparent part of the building and extends the main axis into the building. Its double-opening leads to the nursery playground and creates a spatial and landscaped continuity. The space is directly linked to the water game room. From the reception area, after passing the main desk, a gallery on the ground and first floor organizes the building on its length. Its generous dimensions and natural daylight, make it a perfect play area for children on rainy days.

While the ground rooms are dedicated to the smaller kids, rooms on the upper floor are designed for the ones in their intermediate and last years of nursery. All have access to an outside play area and are doubled by sleeping spaces.

The Landscape: A garden which federates the outside spaces.

Landscape design considers outside spaces as a unified garden and creates connections with the green park next door and the rue de Ménilmontant. The garden softens the urban landscape and domestic scales by aggregating them. It defines the status of the public, common and private spaces. Both gardens reinvent Belleville’s topography in a graphic way, where little gardens give relief to the outside spaces.

The center garden stretches the Parisian asphalt floor into the plot and provides for the transition between the public space of the street and the interiority of the buildings. Set in front of the entry to the nursery, it is preserved from the street and offers a place where people can meet, discuss or have a break. The garden for the nursery offers an imaginary geography when seen from the children’s perspective, with a series of islands, hills, children’s games and graphics on the rubber floors. They offer a private and protected space where children can experiment outside space. 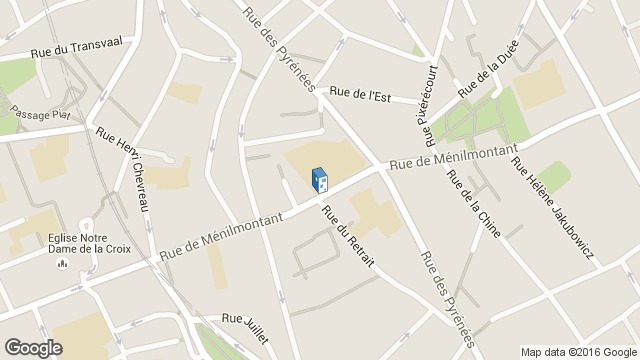