Save
Innovation Center at Merck / HENN
Share
Or
Copy

HENN has broken ground on the Innovation Center at pharmaceutical company Merck's corporate headquarters and factory in Darmstadt, Germany.

The new Center follows the site’s pre-established master plan, also designed by HENN, placing the new building complex between two existing company buildings and at the end of what is to become a spacious public square. 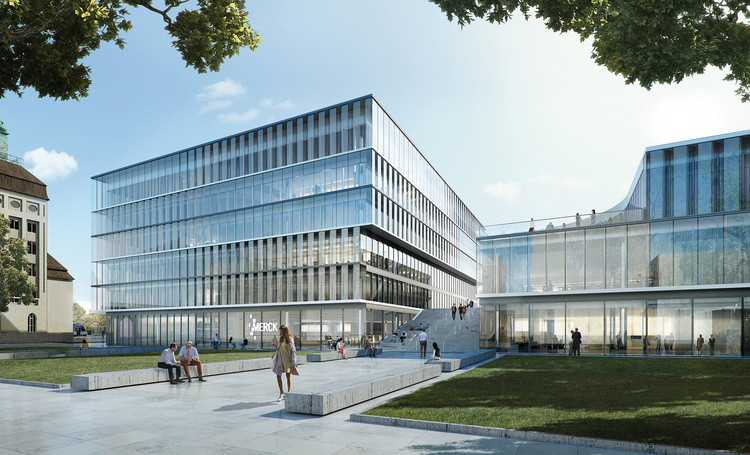 The two-part complex will cover around 22,000 square meters in two parts: a five-story Innovation Center, and a large-scale restaurant with a basement food court, rooftop terrace, and dining space to accommodate 1,000 people. Though separate, the two buildings are aesthetically linked by their façades, as well as a joint upper-level landing.

The Innovation Center itself will house around 300 employees, and will be equipped with a multimedia library, lounge, co-creation area, and open zones laid out “with fluid transitions between areas for communication, cooperation, and concentration.” This setup lends itself to the building’s design—the layout of the Center is based on a four-leaf clover, with elliptical, cylindrical atria that allow for views from the top of the building onto floors below.

Concurrently, “stairs in the form of stepped ramps loop upwards and link the different floors and project areas into a continuous, vertically and horizontally staggered space continuum. The internal areas of the open floors are divided into various zones for communication and team working, [and] the zones along the façade are spaces for activities requiring concentration and intensive thought.”

The Innovation Center will be completed in 2017. Learn more about the project here.