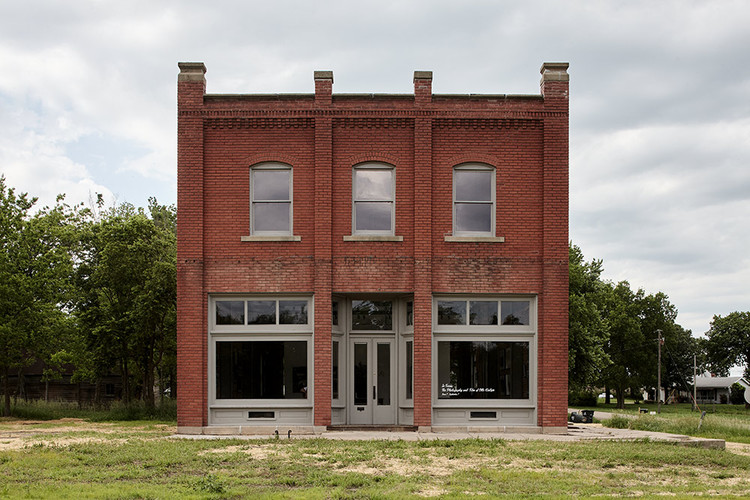 Text description provided by the architects. Volland, Kansas was founded in the late 1800s when Rock Island Railroad, in need of a midway stopping point between Alma, 7 miles northeast, and Alta Vista, 7 miles southwest, built a railroad depot, water tower, coal chute and cattle pens alongside the railroad tracks at the towns edge. In 1890, while the town of Volland had just a single digit population, the surrounding Washington Township hit the high-water mark of it’s population with 400 residents, most of whom did their shopping and socializing in Volland. Trains brought manufactured goods and exported farm products, cattle’s fattened on Flint Hills prairie grass and people prospered. In 1913 the Kratzer brothers, Otto and Bill, built what has been described as a two-story “towering brick general store” in the center of the town (from one end to the other, the town runs 1⁄2 mile down Volland Road North to South).

Kratzer Brothers Mercantile opened on October 18, 1913 and was filled with merchandise, served also as a post office and housed two telephone lines, quickly becoming a cultural hub for the surrounding community. On Sunday afternoons, families came to picnic under the trees on the west lawn. Children from the nearby school came in for penny candy and the local schoolteacher stopped by almost every afternoon. The town was bustling.

Little by little, starting during the Great Depression, the population shrank. Ranches that survived the Depression grew bigger but needed fewer farmhands; World War II sent residents off to urban factories; the depot closed in 1942 with the towns mail flung from a railcar and snagged from a hook, no longer stopping for freight or passengers; the post office closed in 1955; and the town witnessed it’s last cattle train in 1962. The Kratzer brothers general store served as a destination for neighboring towns, run by Otto Kratzer until the doors were closed after his death in the 1971. For 30 years the building sat empty, and exposure to the elements with no caretaker deteriorated the roof to the point of collapse, destroying both the second and first stories.

Within the last 10 years, a sort of renaissance has occurred in Wabaunsee and neighboring counties, with young ranching families moving back in and descendents of homesteaders restoring historic barns and schoolhouses. The surrounding Flint Hills tall-grass prairie has served as an attraction for out-of-towners who build vacation homes in the area. In 2013, what was left of the old Kratzer general store, a sturdy structure of brick walls with a limestone foundation, caught the eye of Patty and Jerry Reece, Kansas Citians who have a home nearby. The couple decided to purchase and restore the building, turning it into an art gallery with a small living space that would serve as an artist’s retreat. The Reece’s contacted el dorado to help with the renovation. On October 20, 2013 the Reece’s invited neighbors near and far to the store for an ice cream social to celebrate the building’s 100th anniversary.

The design team started by taking stock of what was left of the original building. While the roof, second and third floors had collapsed, the masonry shell was left structurally intact and was in good shape. The design team laid out a floor plan similar to the original, with a large open space at the front for events including dining, dancing, and art exhibitions where the main floor of the general store used to be and a catering kitchen and restrooms at the back on the first floor and a second-story single studio apartment where storage used to be. The majority of the second story was not rebuilt, leaving the gallery with an open, flexible and filled with light, revealing two stories of windows and showing off the full height of the original structure.

A structural steel brace was installed in the gallery, preventing deflection and supporting the exterior walls. Because the brace was a focal point within the space, el dorado custom designed and fabricated the minimal piece in their shop to control the outcome with super clean details. Lighting for the gallery was integrated into the brace and placement at the where the original first story ceiling would have been provides some scale to prevent the two-story volume from overwhelming artwork on the walls. The living space, a solid block inserted into the void and floating at the back of the building, includes a studio style bedroom with kitchenette and bathroom.

Preserving this building and its history was a way of preserving the lifestyle and traditions of the area. El dorado’s design solution was a simplistic renovation that relied on clean forms, honoring the integrity of original materials and the context of the surrounding tall grass prairie.

The first exhibition in the general store, appropriately, was an exhibition of Otto Kratzer’s documentary photography and film. Otto was fascinated with photography, and with funds from his highly successful general store, consistently purchased the latest camera technologies with which he documented town life. From 4x5 glass plate negatives, to a Kodak postcard camera, to an 8mm movie camera, Otto produced an enormous volume of work, capturing life in the Flint Hills in the first half of the 20th Century. Much of Otto’s work was preserved by his granddaughter, who stored the film and negatives in a closet until a local historian recently spent countless hours digitizing more than 1,000 photographs and nearly six hours of film. The exhibition runs through Labor Day 2015.