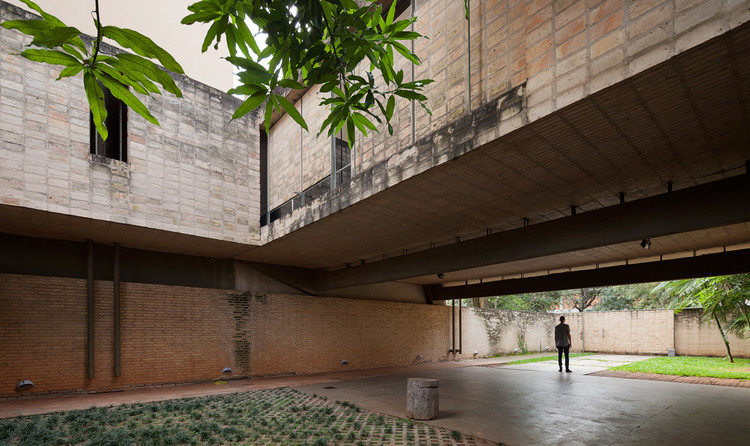 Text description provided by the architects. The project and construction of the house is presented as very personal challenge, its hedonistic goal almost forces the architectural piece to constitute the thought and knowledge of the architect. The long friendship, early from the formative years with Solano Benitez, Alberto Marinoni and the boys from Gabinete de Arquitectura marked my production in a way that I consider this project as the opportunity to conceive a group experience, share ideas, experiment a scenario of reciprocity to which we are accustomed.This entire situation was reinforced by my father, Guillermo, who made it easy for the ideas to come together, providing his experience in the constructive branch and his opening to vanguard (maybe because of his work relationship with Pindu in other times), that turn him into the enlightening link between thought and production. Having mentioned the protagonists, the explanation for the thing-house-machine can be told through the story of how it is located and built.  I quote these two last aspects, because the work always had some ratio and sensibility.

The lot conditions. A narrow and long ground. An invasive neighbor (a high rise building with a view to the backyard). First move, I tie the social block and service to the blind boundary of the building and approach it to the rear part of the ground. Second move, I advance with the block that has the rooms generating an intermediate courtyard that has the exact measure so there is no visual invasion, but elevating it to generate shadow and an empty space, the space that by generations was exploited and searched for in the region for weather issues.

How I do it: located both blocks; the bedrooms block is suspended by two vierendeel beams from which emerges crossbeams that support the slab by tensors; the vierendeel beams are supported on the edge through brackets and ball joints.  To this structural logic it adds the use of common brick that turns it into the main material, almost obsessively in the entire project.  The brick measures everything: the structure, the stairs, the movable panel openings, the floor the ceiling. The collaboration from the engineer at this stage was decisive, because it gave special attention to the esthetic requirements. The adjustments of the structure potentiated the expressive capability of the materials.

Premises:  spatial continuity and flexibility, the total measurement of luminosity and ventilation; scale changes. All enriched by empiric details rehearsed during the constructive process.The relationship between the blocks materializes itself through a third space-connector, its dimensions don’t limit them to a mere walk through; instead it turns it into an assumed progression of the continuous space. I thank my friends and my family, above all my wife (She asked me up to the very last day which was the house door or where was the entrance). Because of them I can enjoy this experience daily; the best of it is living it. Memory of the authors