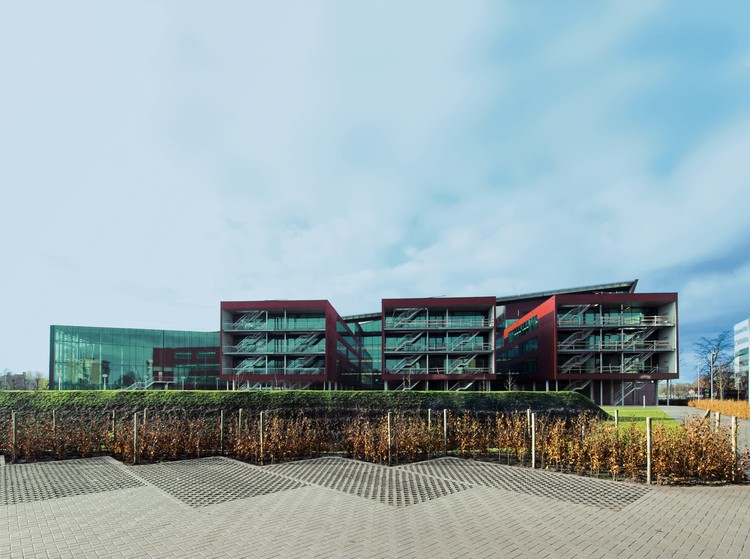 Text description provided by the architects. In the Middle Ages, Bruges had two big ambitions: to have a sea port and a university, fine ambitions that the magnificent old city could barely realize despite its many efforts. During history Antwerp and Ghent took over the leading roles in those matters and Bruges became during three centuries ‘Bruges la morte’. However at the end of the 20th century Bruges is the 3rd seaport of the BENELUX, and in 2009 the VIVES University College was built, associated to the well known ‘University of Louvain’.

In 2003 thirty eight design firms expressed interest for the architectural competition on a European level, in the second phase the 6 remaining teams submitted proposals. The jury chose the design by architects Johan Bosschem and Jan De Vloed , a temporary collaboration of the Belgian firms SAR architecten of Ghent (Belgium) and Architektenburo De Vloed of Destelbergen (Belgium).

VIVES University College – Campus Bruges is a campus of 24,000 m² for 3,500 students. It contains a teaching training faculty, a faculty of health care, a faculty of business management and general facilities such as a large auditorium for 650 students, a university library, catering for 350 students and a general administration department.

The School is the World

Johan Bosschem: “We worked out an architectural concept that unites the learning environment and the world. We strongly encouraged interaction between the inside and outside world in its expressive gesture, its transparency, and its receptive location on the site. We have acquired experience in regard to the building of schools. As an architect, and also a professor – I was also an interim dean for a while – I am closely involved in the organisation of education and pedagogical programmes. So I know the needs and desires of the education system from within. Nowadays, the importance of the classroom is greatly reduced, and self-development is ever more central. That is why we organised an inspiring study environment.”

The atrium and study facility of VIVES University College - campus Bruges give shape to an almost archetypical space. In this stronghold of knowledge and self-fulfilment, all the facilities of a contemporary learning environment are at hand. And nowadays, there is the matter of the transition from purely functionally arranged spaces to environments that pay much attention to the value of experience and entertainment.

Johan Bosschem:“Our intention is to encourage independent study. Students spend a lot of time here.We have tried to boost this aim at independent study as much as possible. With this thought in mind, we have created an inviting and pleasant study landscape.” The VIVES University College board expressly looked for visibility, a beacon in the city, and eventually chose an architecture that ‘speaks aloud’. Bruges’ ultimate academic dream got its materialised equivalent.

The layout of the new VIVES building was realised with the greatest care, and the association with the residential surroundings was well considered. To create as much green zone as possible, the architects pushed the building close to the neighbouring Expressway N31. This created a sound screen, an intermediary zone, and also a visual buffer between the busy traffic axis and the green campus. The limited occupation of the site has its own logic, and is based on a vision of social relevance. Indeed, through this layout, the architects have optimised public visibility. The site was given a strong additional public dimension through the provision of maximum parking space.

VIVES University College stimulates the use of public transport and offers ample facilities to cyclists. On the campus, traffic is entirely divided into zones. Accessibility and mobility were important in the design for the occupation of the site. The architects have paid particular attention to the development of a structure that facilitates optimal flexibility. The modular approach of its architecture offers opportunities for the future, and can be tuned to the prevailing pedagogical views of the moment.

The design is powerful and coherent. The ambition was an integrated architecture, with a strong synergy between the different parts. The advisory engineers, the landscape architect, and the creative artist, all contributed to this. Art and architecture, structure, and technical equipment, maintain themselves in perfect balance.

For architect Johan Bosschem, the design methodology is of primordial importance, because it determines the design. Architecture is complex and contradictory. For Johan Bosschem, the stimulating challenge lay precisely in this complexity. In fact, the practice of architecture is ambiguous, comprehensive, and full of tension, not to mention the many conflicts. This has to do with architecture’s Vitruvian ambition to unite usefulness, beauty, and technical ingenuity. This connects with its spatial dimension, and the opportunities the built space has at its disposal to mediate between opposing kinds of space. “The medium of architecture is space. I deal very consciously with that in the design process, particularly with the space between the so-called functions”.

In cities all over the world, stairways are more than passage ways: they are also meeting places, lingering points, or places to simply quieten down and enjoy the sun or view. “The atrium is an important place in the VIVES campus Bruges story. Here, the networks come into being, and at the top of the stairs, space ends in silent space. There is a certain symbolism to that, of course. Light streams in through the curtain walls and two skylights. In the atrium, you strongly and actively relive the space in the build-up of experiences. You do not get the feeling that you are walking in a building, but rather in a city. We have created a minor city with pathways. You can wander in it. It is a place where meetings are sublimated. People form networks that come into being exactly in that interspace, the ‘other’ space. Between the curtain walls, we have created very comfortable sitting areas – they refer to outdoor cafés in streets. The urban feeling is also reinforced by the many windows that look out on the atrium. 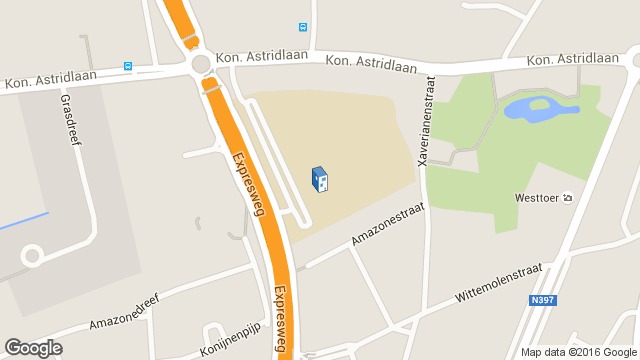 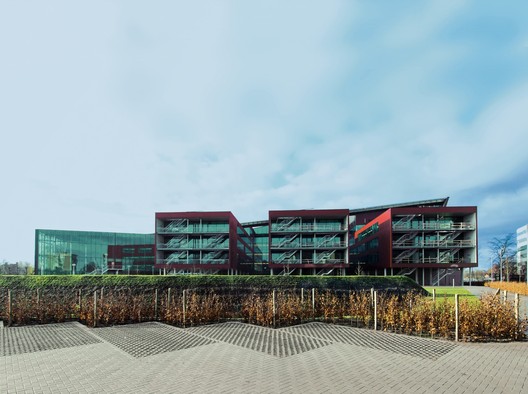