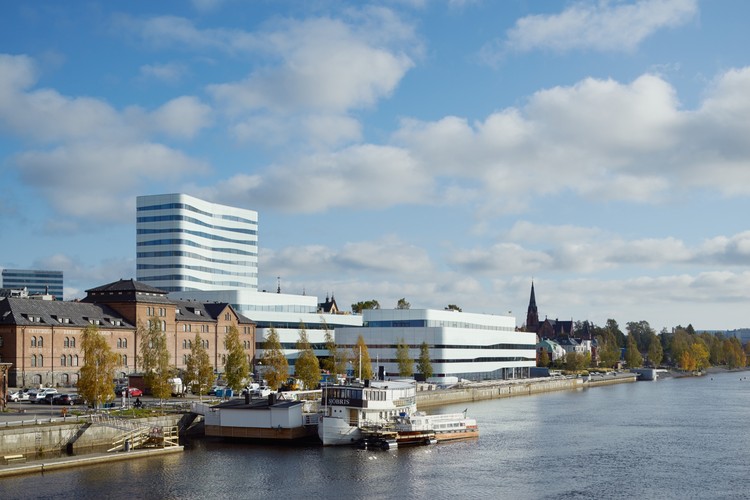 Text description provided by the architects. Väven Cultural Centre in Umeå in the north of Sweden has won the Kasper Salin Prize, Sweden’s most prestigious architectural prize. The prize was presented on Friday 28 November 2014, a week after the cultural centre was officially launched, a major triumph for the city that was crowned European City of Culture in 2014.

The cultural centre has been designed by Scandinavia’s leading architectural practices, Snøhetta and White, working in close collaboration with the public body of the Municipality of Umeå and a private developer Balticgruppen AB and the people of Umeå to create a new 25,000 sq m building linking the city centre to a newly regenerated quayside location.

Väven (which in Swedish means ‘weave’) brings together a diverse range of cultural amenities including the city’s library, museum, conference centre, black-box theatre, and a new hotel. The centre symbolizes the city’s ambition to entwine a whole series of disciplines within a cluster of flexible spaces which can change in accordance to the needs of its citizens, and where public amenities can be supported by commercial investment under one roof.

The cultural centre is located in central Umeå, between Storgatan and the Ume River and is part of an urban development project ‘City between the bridges’ which will create waterfront-based cultural and educational facilities, a public walkway, parks and squares, as part of the Municipality’s vision to open up the city towards the river.

White has been entrusted to carry out this vision, as a practice with a proven track record in Umeå city centre and its Cultural Campus. Built works to date include: Umeå Östra Travel Centre (2010); the School of Architecture (2011, in partnership with Henning Larsen); and Bildmuseet, a centre for visual culture (2012). Creating the second largest cultural centre in Sweden has been the crown jewel of this work.

With vast, spanning windows, generously robust surfaces, and flexible meeting rooms, P5 is the newly opened contemporary conference centre within the top floor of Väven, a cultural centre in Umeå, Nothern Sweden. White was commissioned Väven by the municipality of Umeå so that the city could embrace its path towards Scandinavia’s foremost hub of art, music, and literature. Umeå, a 2014 European Capital of Culture, has quadrupled its population since the 1950s.

Väven, with P5, stands as an exemplary venture pointing out the direction for Umeå’s development in the decades to come; as an architectural landmark of premier calibre it has already won Sweden's most prestegious award, The Kasper Salin Award, and has been nominated for the Mies van der Rohe Award.

As the name suggests, P5 on the fifth floor of Väven. Overlooking the river Ume, the centre has expansive views of the surrounding landscape. Walking into the main lobby, one’s attention is immediately turned to the characteristic walls of undulating black glass that encapsulate the centre’s meetings and practical functions. The attention is gently shifted to the crackling conference facility campfire in the middle of the lobby, burning what could be “näver”, or the distinctive bark from the surrounding area’s pervasive birch trees.

The black glass offers mirror images of daylight, people in motion, and the room itself in sharp relief. This is complemented by room-high wood paneling reminiscent of, and inspired by the city’s signature Birch trees – the white bark resembling the opaque cladding during the daytime hours, while at night the warm interior light gives off the same illusion. Measuring 6,800 sqft the signature walls are comprise of 15,000 pieces of bark interwoven with remarkable precision. The darker bands meanwhile, are symbolised in the envelope’s glazing.

The scale is dense, rich and colorful - almost the opposite of the exterior but still obviously Laplandic. P5's rich color palette is enhanced by the monochrome furniture in full-bodied orange, which represents one of the centre’s hallmarks; its implementation of craftsmanship and sturdy materials which characterise the experience.

"The P5 is not posh and luxurious. It is much better than that. Our goal has been to capture the state mind that exists within those that live above the Arctic Circle; one that is closely intertwined with nature, and to express that, interwoven into our design.", says architect Mattias Lind, who during his 20 plus years at White, has worked with high-profile projects such as the offices of renowned advertising agency Forsman & Bodenfors and the top floor conference center at Calatrava’s Turning Torso in Malmö. 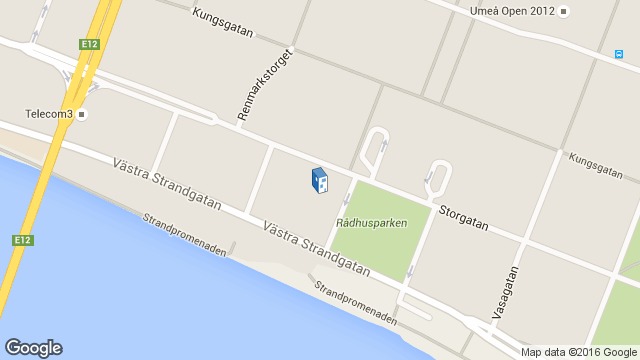 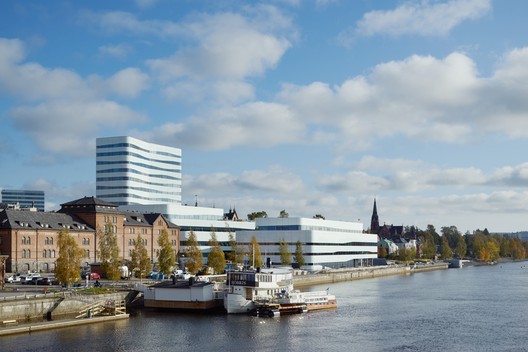