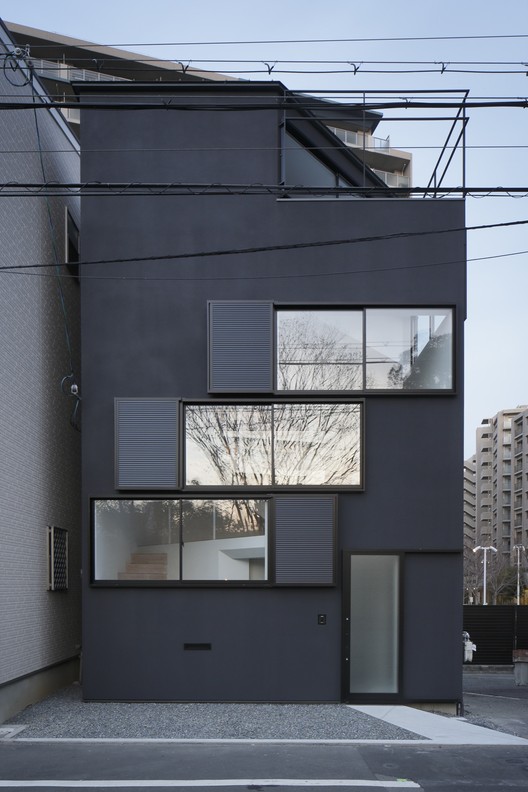 Text description provided by the architects. The narrow site is located at the heart of Osaka, surrounded by the back of some apartment houses. The client wants to have a view towards the Yodo River from the house, as well as having a rooftop terrace for enjoying the annual firework competition above Yodo River.

Instead of simply putting openings on the direction to Yodo River, we displayed the small windows from the ground to second floor spirally, as if they were swirling. This arrangement of openings frames the view in particular to the river, the street and the sky. By connecting the interior with the fantastic view, the volume of the living space also expands visually. We decided to use small windows rather than installing big windows in the center of the elevation, because it will provide a balance between the sense of freedom and the need of privacy for the households in its urban context.

In terms of construction, the plaster is applied on the walls, which become surfaces without joints but sashes. This allows us to place the windows freely on the surface. Besides, it was not possible to build a bearing wall on single flat surface due to the spiral display of the windows, so we used a steel frame to support and managed to realize a spiral form of bearing walls. Also, the opening on each slab is triangular via using Hiuchi-beam a beam spans diagonally. These triangular cuts on the slab form a fluid spiral volume for the circulation internally, from the ground to the terrace. Although it’s a minor geometry change, it creates a flow for both the interior and the exterior of the building, which shows a sophisticated relation with the complicated context.